Megnut (who reserves tables under the name of Madame Megan) blogs Balzar, where we ate last week in Paris.

I had a kir and a plate of aile de raie. It had a lovely, unashamedly buttery sauce. I'd never had skate prepared this way, still with its cartilaginous stiffeners, and that took a little getting used to. As it happens, I was jealous of Meg's choucrotte St.Jacques, which looked even better and more various. But since, in a subsequent visit, it seems she was working on the pronunciation of raie, the sentiment might have been mutual.

The creme caramel for dessert was flawless, but it was still creme caramel. You can ask a dish to be good, but it's still going to be what it is. Should've tried the tarte au citron. Next time. 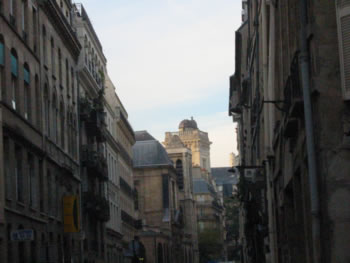 On her subsequent visit, Jason was intrigued by andouilletes, but the waiter forbade it. I've had them a couple of times, most recently with Jean Clement at (I think) Moissonier. They're offal, and strongly-flavored offal at that, but they make tasty sausages. Their fans have a group called L' Association Amicale des Amateurs d'Andouillette Authentique which promotes real andouillettes in the face of piddling modernisation. See also lutefisk, haggis.

I'm hoping to write more about the meal -- not the food, which was nice, but on the metasubject of hacking food. Needs space and time. Probably I'll submit it to TEKKA. But it was a nice meal, and why not blog it too?