I recently argued that, when we assume Usability is the core of software goodness, we're adopting a specific style and aesthetic in preference to other possible styles and aesthetics.

Louis Sullivan was an important modern architect, father of the skyscraper, and the stern theoretician who wrote that "form follows function." When you see a glass and steel tower, you're seeing Sullivan.

Here's a bit of one of his buildings, a Chicago department store: 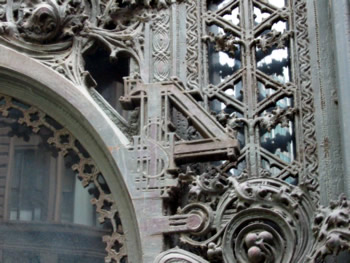 And it's designed to be seen again and again. Not to demand your attention like a Times Square sign or the Palmolive beacon, but to reward the attention you pay it.

And in a lot of software, we want it.

Extra credit: We spend several days, at least, learning to operate a car. We spend longer, learning to operate the basics of algebra and calculus. We spend a few years achieving basic competence in fields like medicine, or gas fitting, or theatrical lighting. Why do we expect all our software to be mastered within an hour or two?