We were sitting outside an Italian café on the river Cam, watching the punts and drinking a very nice Primitivo, and someone noticed that the headline of the Guardian spoke of American plans for a wall surrounding the Sunni district of Adhamiya in Baghdad.

“That sure worked well in Berlin!”, one of us observed.

When did Americans become people who build ghettos? Aren't we the folks who tear them down? 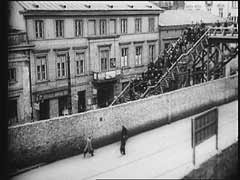 The walls are supposed to protect the people inside them from truck bombs. But they won't help them with the mortar attacks; they'll make the residents sitting ducks. They won't help them get to work. And, if gunmen capture the entrance to the enclave, or the gunmen are the police, they can kidnap or kill whoever they want, because no one can get out.

Someone asked me at Tinderbox Weekend, why I talk about politics more often here than I used to. Do I? Perhaps it's a sign of the times.