The Israelis: Founders and Sons

The founding generations of Israel were not fools. They had concluded ion the 19th century that Europe was ultimately inhospitable to Jews. In this, they were not wrong. If Jews had to go, they had to go somewhere. Precisely where? Herzl didn’t much care, but Palestine seemed one of several decent possibilities, and its British administrators did not entirely disagree.

Hitler’s rise changed everything, and overnight the project transformed from a doubtful political speculation to an urgent rescue mission. The Founders knew perfectly well that there were already people who lived in Palestine; most expected that, in time, they would be good friends to the Jewish immigrants who would transform malarial wastes into green fields and shining cities. It didn’t work, but after 1932 (and especially after 1948) there was no choice.

A shaggy novel, with lots of incident and detail included for the joy of incident and detail. A New York family goes to the Caribbean island of Saint X for a luxurious vacation, father and mother and two girls. Princeton freshman Alison is hot stuff and knows it, little sister Claire is a little strange and knows it, too. On the final night of the vacation, Alison sneaks off and then vanishes; her body is eventually discovered on nearby, uninhabited Faraway Cay. Everything is changed.

This is formally a murder mystery and the little sister, who changes her name to Emily, serves as its detective. Nobody here is reliable, least of all Claire/Emily. You can’t rely on the police. And in the end, you cannot rely entirely on the author.

Plague dinner 19: kori-mex bibimbap with beef mole. A complex recipe featuring chocolate, gojuchang and raisins and 10 cloves of garlic in the same sauce. Hot and sweet. That’s layered on a salsa fresca spiked with lemon and fish sauce. All on top of crispy rice. From Mandy Lee, ESCAPIST COOKING.

Better news from NY, though avoidable shortages of PPE and analgesics are causing untold deaths and miseries. Ghastly news from Wisconsin, where a partisan state Supreme Court colluded with us Supreme Court to steal an election tomorrow. If this repeats in November, Trump could steal the electoral college and precipitate collapse of the Republic.

I wrote to console a colleague who lost his job this week. He asked, “Are you doing OK, too?” I sent an honest reply; he says it should be a blog post.

Yes, for most public-facing values of OK. I’m fine working from home. I’m cooking a lot. This week the code has been garbage, but I’m distracted and breaking in a new Catalina machine. The code will come.

But not being able to help is driving me nuts.

When I was a kid, I had a running argument with my uncle Fred. Also with my Dad, but fathers are complicated so let’s stick with Fred. Here’s Fred on Saipan (center): 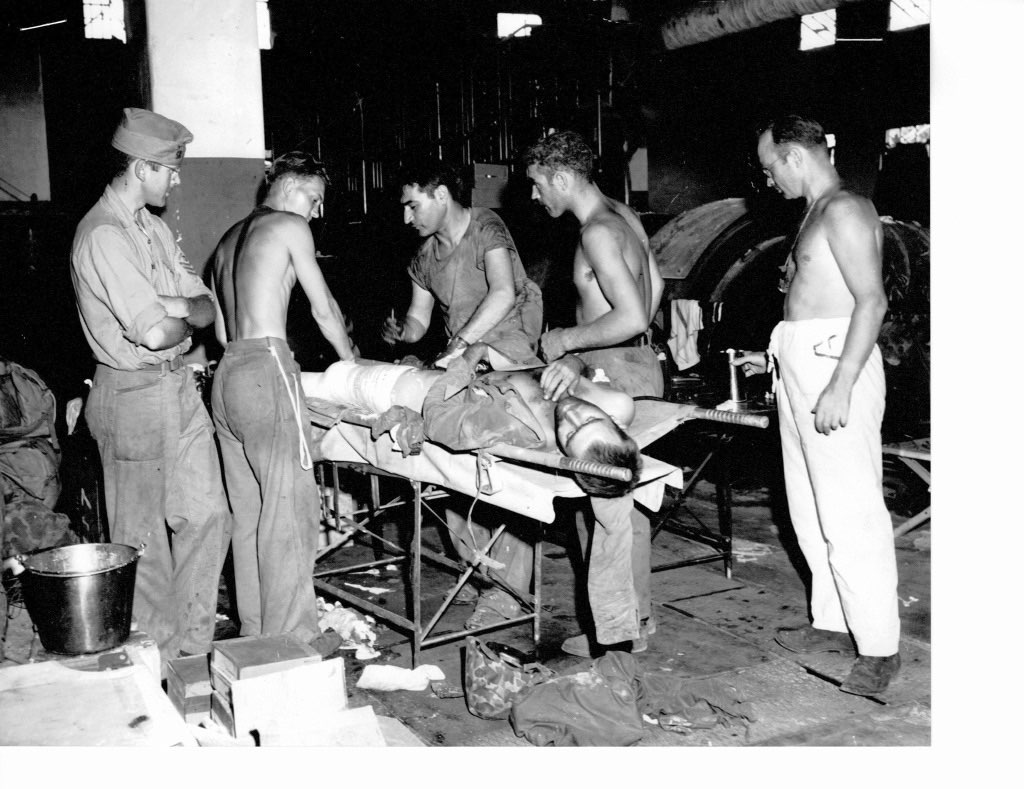 The Fred I knew was a crusty, gruff old surgeon who was not shy of laying down the law, and his chief law was that anyone who could be a physician ought to be one. My family was very medical: my grandparents, physician and nurse, met on an Indian reservation where they were working in the early 20s; uncles Fred and Li and Mike and Tom were doctors, my dad was a doctor, aunt Hazel was a nurse.

No one in my generation went to medical school.

I never really regretted that. But I have spent a career building tools for research, tools to help people make sense of a crisis and to make the right decisions. I thought it was significant work, more rigorous than medicine, more elegant, and with broader reach.

It was all a mistake: people don’t want a better handle on the data, they just want to win the next election.

Even so, I could be doing something slightly useful. I have some hardware chops — not good enough for design anymore, but plenty for assembly. I know my way around a machine shop — old-style, not CNC, but then again I could adapt pretty damn fast because some of my grad school work laid foundations for programming these things. I could assemble ventilators from a kit or on an assembly line. I could do QA or train new assembly techs. I could write briefing papers and backgrounders. I could recruit a small army of engineers and technicians.

Hell: for the next eight weeks, all medicine is going to be one disease. I could be a highly-specialized nurse in — what — 80 hrs of training? So one week. Not ideal, not desirable, and (since I’m 64) risky, but we’re going to have a lot of dead physicians and nurses to replace by early May. As far as I know, nobody’s training the stopgaps. That’s the way you drive the case fatality rate from 1.3% to 7%: ask Bergamo.

But I can’t. The local politicians here are in charge of everything real, they hoard information, and they’re doing absolutely nothing. Nothing! I’m not even sure they understand the catastrophe that’s almost surely coming; I send them the papers but it does no good.

And, as you see, it’s making me a little nuts.

It is now clear that, when the Federal government face planted on the virus, our state and local governments ought to have stepped up. Instead, they wasted precious weeks insisting on (only) doing their job.

Lots of people may die because mayors and health commissioners did only their job and ignored what was needed.

A daring and fascinating study of what the Soviet Union was trying to do in the years after the great famines. Spufford attempts to capture not the budgets and programs but what people believed and the goal toward which they together were working — a vision of abundance that would forever put the specter of medieval Russia to rest.

Spufford does this through a series of lightly fictionalized vignettes, scrupulously documented, that try to show clearly what everyday people thought they were trying to do. The core idea here was not bad: where capitalist markets waste lots of effort and material to discover an equilibrium price, systematic planning and linear programming can discover that price from first principles. If you invent a new kind of car, in America you’d have four companies building four variants. They’d spend lots of money on marketing and lobbying and PR, and it might take a decade to figure out which was best. Every part in that car undergoes the same wasteful process. If you could just get things right the first time — even close to right — you’d save a tremendous amount of time and money. You might be wrong sometimes, but even then, you only need to be a few percentage points faster and smarter than the wasteful random experimentation of capitalism.

It didn’t work, but they weren’t all idiots.

The lamb was 24hr at 133°F with garlic and rosemary, then seared on the grill.

We wasted time, and now doth Time waste us.