I just finished the first season of Veronica Mars. It's a clever idea -- a very contemporary re-conceptualization of Nancy Drew or The Dana Girls, stories about high school girls who are detectives in their spare time. Veronica a wonderful power fantasy: Veronica is beautiful and sassy and fiercely independent. She's incredibly smart and fantastically hard-boiled. She always has a better come-back than she needs. 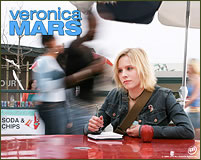 Some lunkhead has let the air out of her tires in the school parking lot, and a classmate sees her working on her car. (Working on her car! I can't change my own tires!)

Veronica: Just as God made me.

this morning and came across this argument about interactive drama.

Just as not every novel can be successfully adapted to film, not every type of character and consequently not every type of plot lends itself to the first-person perspective of interactive drama. Given the choice, would we want to share the subjectivity of somebody like Hamlet, Emma Bovary, Gregor Samsa in The Metamorphoses, Oedipus, and Anna Karenina, or would we rather enter the skin of the dragon-slaying hero if Russian fairy tales, Alice in Wonderland, Harry Potter, and Sherlock Holmes? If we pick a character from the second list, this means that we prefer identifying with a rather flat but active character whose participation in the plot is not a matter of emotional relation to other characters but a matter of exploring a world, solving problems, performing actions, and competing against enemies. There may be good reason why computer games overwhelmingly favor certain types of plot and user experience.

I'm not a great fan of Harry Potter, but Harry is hardly "flat but active" and the whole point of Harry Potter and the Sorcerer's Stone seems to be that your character ought to combine action and contemplation, courage and prudence. Sherlock Holmes is far from flat, and Alice is hardly a woman of action.

You might not want to be Emma Bovary, but how about Jane Bennet?

Oedipus Rex, on the other hand, is flat. He's got one goal: he's going to save his people. Nothing is going to stop him -- certainly no mere personal consideration. He's going to get to the bottom of things. Oedipus doesn't have a roommate or a violin, he doesn't use cocaine when sad or pick out the sovereign's initials in bullet holes when bored. We don't know much of anything about Oedipus' brother and his remarkably regular habits, nor about his obliging landlady.

Here's another teegager: Polyxena, one of the surviving women of Troy, who is about to be sacrificed so she can join the dead Achilles in Charles Mee's The Trojan Women 2.0:

Of course, I have to admit
I'd have liked to live a little longer
I mean there's a lot I don't know yet.
Like: why do guys insist on driving?
And how come they call on Friday to ask you out
for Friday night?
And why do guys hate to get dressed up?
How come they don't like to talk on the phone?
Why do guys drink out of the milk carton?
And how come they like to play air guitar?
Why is a guy who sleeps around a stud
but a girl who does is a slut?