Driving back from Rochester, we stopped in Stockbridge at the Norman Rockwell Museum. They have a small room there, devoted to his paintings of Roosevelt's Four Freedoms.

I remember when Rockwell was trite, when these paintings were safe, homespun homilies. But that time now seems as distant as do Rockwell's country grandmothers bringing out the huge roasted turkey to the Thanksgiving family table.

Rockwell didn't like his Freedom from Fear much. He thought it was too obvious and, at the same time, too forced — sleeping kids, protected parents, the assurance that the grim headlines of bombing and terror reported terrible events overseas. Nowadays, of course, our government clearly wants us to be afraid: quiet, complacent, and frightened. 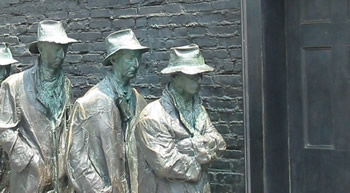 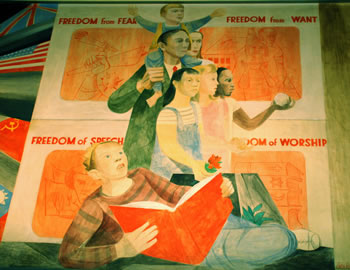 Painted by Anton Refrigier, the mural provoked the Trial of the Rincon Annex Murals when Republicans denounced the work as an attempt to convert post office patrons to communism.