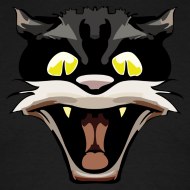 One of the things that makes Echo Bazaar work is that it is under-written. The setting is baroque: London has literally fallen into the Abyss, Hell has an embassy in Marylebone Road, and the game greets you as its “delicious friend”. But the writing is, for the most part, clean and spare, simply stating (for example) that you’ve successfully picked the rat-catcher’s pocket for a tasty string of six rats.

One recurring bit of business is the starveling cat, who always appears in doggerel.

It knows what we think,

“Starveling” once might be a bit much, but recurrence makes it work. (There must be a dozen versions of this starveling cat, and you can buy starveling cat t shirts.)

So many games are so overwritten or just incoherent that their writing is obviously window dressing. “Someone set us up the bomb!” “It’s made of yew, and nearly new!” In games that repeat the same words time and again, simplicity and word choice can take you far.