Another Facebook critic of Next Restaurant, Kimberly Small, is seething because her chicken wasn’t.

“Uncooked butter poached chicken...’ You are implying, via your insinuations, that food is open to interpretation. I disagree. The overall presentation? Maybe. But the execution of the food? Absolutely not. It doesn't take a genius to know good technique. So please, with all of your fluff, please explain to me your opinion of such a fine restaurant serving uncooked butter poached chicken.

I was unable to try the Paris 1906 menu at Next that featured this dish of Suprêmes de Poussin (Escoffier 3130), and which was served with poached cucumbers stuffed with foie gras. Here’s Jeff Ruby’s description, writing as the ghost of Escoffier:

They took my beloved suprêmes de poussin (poached chicken), sliced the breast into a diamond shape, and coated it with  sauce blanquette. Magnifique! Curiously, they also poached two cucumbers in butter, wrapped them in salt pork, and supplanted the seeds with chicken mousse. I still do not understand how. 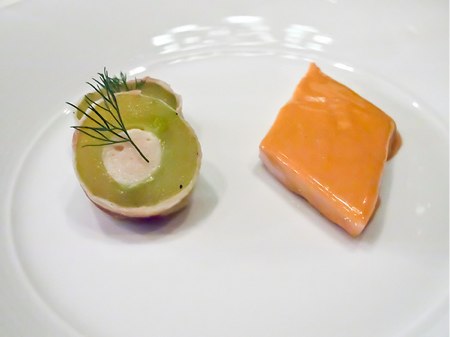 A friend of mine, a conductor, was called to fill in for an ailing colleague who was slated to conduct a concerto my friend knew well. He said he also knew the soloist. “My job,” he said, “is to make the soloist’s interpretation – a mistaken interpretation – as clear as possible.” Let’s not ask whether we like this dish, but rather, why is the dish as it is? What is going on here? And what might have led Ms. Small to think it simply uncooked?

There is the possibility of sheer error. Perhaps something went wrong in the kitchen. Perhaps someone made a terrible mistake and nobody noticed. That’s a possible interpretation, and in that case the dish is simply saying “Someone has blundered.” But perhaps the dish is prepared this way for a reason. What might it be trying to say?

The menu reads “Paris 1906” and the course is Escoffier 3130, but nobody at the Ritz Hotel prepped or plated it like this. One glance tells us that this dish is performed in modern dress: it is indeed an artfully cut piece of chicken, very gently cooked – Escoffier is emphatic that the breast must never touch hot water and must not be overcooked – and sauced. But this is not belle epoque! What’s the story?

First, obviously, we’re playing with the east and west. The plating suggests Japan. Those cucumbers suggest maki rolls. So, perhaps the chicken is taking the role of sashimi? That wouldn’t be too far from Escoffier’s intent, which is clearly to preserve the tender texture of the delicate meat. (If you want richer flavor, he’s got plenty of browned chicken preparations on the next page.) We’ve got white meat, a pale sauce, green cucumber, greener fennel, and the pale forcement: we’re thinking of color, clearly, as well as taste and texture. The geometry is a clue, too: this plating is High Modernism – not the style of the Ritz, but Leger (who was 25 in 1906) and Braque (who was 23) might see the point.

Second, why do we so seldom cook from Escoffier today? What inspired nouvelle, to which this plating also alludes, and then gave rise the experimentalism of French Laundry, Alinea, and El Bulli? Two things, I think: the old recipes were tired because we had eaten them too often and cooked them too long, and the old recipes were tired because they were overcooked. California, land of fresh vegetables and sanitary, looms large here: in the 1980s we rejected overcooked food because we weren’t worrying anymore about cholera and trichinosis. In 1906, the whole world seemed to be a Third World country and the elites who ate at the Ritz knew it. They liked their food, but penicillin was still thirty years in the future. An undercooked dish could kill you, and often did.

But that’s not the way we cook now. As I understand it, that chicken is cooked sous vide — very, very slowly, more slowly than Escoffier’s people could possibly have managed — with an eye to being precisely done throughout. If you’re used to traditional prep, this is going to seem undercooked because the exterior isn’t overcooked. The sauce blanquette is going to emphasize the effect.

So on this plate — without tasting — I think we have two interesting ideas. We have the fascinating question of: what is cooked? And what is overcooked? This involves taste, texture, and biology, and its parameters have changed in the century that separates us from Paris 1906. Yet the underlying concerns are the same, and they connect us to Escoffier and his clients Read the text: Escoffier does want to be very careful not to overcook that chicken.

And then we have our memory of the past refracted by our knowledge of the world, things we know that Escoffier didn’t. Almost none of Escoffier’s patrons had ever tasted pad Thai or picadillo or wasabe or vodka, just as none of them had been more than 324m above ground level, driven a car, read Lady Chatterly’s Lover, or listened to Le sacre du printemps. But it’s not that long ago; my reading teacher was born in 1907, we all have met people who might, had they had the money, have stayed at Escoffier’s hotel and eaten his food. So we have the idea of Escoffier 3130 and its ingredients, deployed here to a new effect with new means for a new time.

And maybe you don’t like this chicken. Maybe you’d like it browned and served with rice and beans. And maybe you’d like Hamlet to have more girls and better jokes. This isn’t about what you want. Mr. Achatz and Mr. Beran are on the stage, and we’re here to listen and to understand, and maybe then to weigh their ideas and to take action.