Lost in the Bazaar

Poul-Henning Kamp argues, in A Generation Lost In The Bazaar, that the open-source bazaar of Unix has become an insupportable mess.

Today's Unix/Posix-like operating systems, even including IBM's z/OS mainframe version, as seen with 1980 eyes are identical; yet the 31,085 lines of configure for libtool still check if

Most comment threads are awful, and there’s plenty of trash in this article’s long comment thread. But there are also fine McLuhan moments, including sudden appearances from Eric Raymond (author of The Cathedral and The Bazaar) and David MacKenzie, author of the autoconf program that Kamp ridicules.

As the creator of Autoconf, I'd like to apologize to everyone for using m4. I chose it to minimize dependencies, as it was on every Unix-like system already. Many of us were on 28kbps dialup and people would complain about the time needed to download a big package like Perl. Then I hit so many Unix m4 limitations and bugs that I ended up requiring the GNU version anyway. I probably should have started over at that point with another approach. It's true that I did most of that work before I'd earned my CS degree, but no one more experienced deigned to tackle the practical problems I needed to solve, so I had to. (Larry Wall had half-tackled them.)

One thing that Kamp misses, surprisingly, is the tremendous change in our sense of craftsmanship and style. I know that my handwriting has changed a ton in the last decade. Hasn’t everybody’s?

A public lecture series at Harvard on Science and Cooking returns with superstars like Ferran Adriá (El Bulli), David Chang (momofuku), David McGee (On Food and Cooking), and Wylie Dufresne (wd-50). Videos will be available free on iTunes and YouTube. 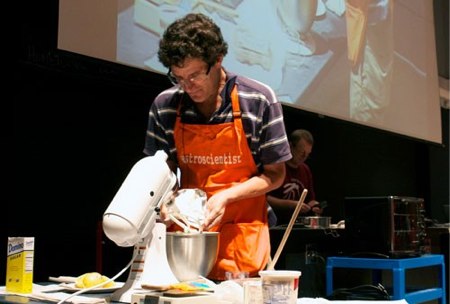 Derek van Ittersum joins Mac Power Users to talk about how he uses Tinderbox and DevonThink Pro for his research.

Over at HTLit, I set out to defend the indefensible and ask, “What is the notorious Hitman Absolution trailer trying to say?” I'm going to be giving a talk about digital humanities, NeoVictorian computing, and our new understanding of the digital next month in Kolkata, formerly Calcutta.

I know less than nothing about West Bengal. Surprisingly, my list of Usual Suspects for travel has come up empty,. It you know what I should see, or eat, during a necessarily short trip to this part of the world, please Email me.

Born to affluence in 1920’s Shanghai, Cassandra faces formidable afflictions. Her twin brother gets all the attention, and all the best presents. Her mother is distant, her father feckless, and even a child can see that Shanghai is falling apart.

More strangely, Cassandra sees ghosts; indeed, she sees them everywhere, and her growing world is always filled with the hungry spirits of the past. This strange ability shapes Cassandra but does not dominate her; she is not a slayer or a priestess, she’s just a well-drawn Chinese girl who happens to see ghosts.

She lives in interesting times. Her father flees the Depression and heads to the Black Isle, a large island at the tip of the Malay peninsula that shares much with the Singapore we know. Her mother and twin sisters will follow in time; she never sees them again – at least not as you and I see. But even in this new island home, ghosts are everywhere. War follows, and then years as a freedom fighter, and then more years as the neglected former consort of the newly-independent island’s Prime Minister. And then, a distant Professor starts stirring the ghosts once more.

One obvious touchstone for The Black Isle is James Clavell’s King Rat, his good book. The war is the heart of The Black Isle, and Tan quietly builds an argument that for much of China, the short twentieth century was experienced as one long war. Another, less obvious, is the title story of What We Talk About When We Talk About Anne Frank, for Cassandra’s struggle is not so much with her suffocatingly-close twin and her war-criminal lover as with herself. Self-loathing would be conventional, and Cassandra is bored by convention, yet she cannot escape the haunting wrongness. Cassandra sees ghosts – aggrieved spirits – everywhere, and in her world betrayal is the norm, peace the silent and easily-forgotten exception.

The Black Isle is a Secret History of a country that resembles one we know, blending myth, history, and invented detail. This was an intriguing decision, inviting the reader to imagine the ghost books that must have been imagined in its making. On the one hand, little would need to change to make this a literal secret history, though doing so might incur the displeasure of that nation’s leaders. Alternatively, we could follow China Miéville into urban fantasy, forbearing the fields we know entirely and describing an imaginary world that just happens to be China much as City and The City describes an imaginary Eastern Europe and Foundation describes the fall of an imaginary Rome.

All historical fiction invites suspicion of Orientalism. Tan handles her sexy Chinese protagonist with grace and honesty. Knotty and perhaps unsolvable questions of craft and history appear continuously here, as perhaps they must, but Tan (like Cassandra) manages to avoid disaster while not fearing to get down in the muck with the ghosts

Cassandra embodies a complex and thoughtful reflection on femininity and feminism in the Chinese diaspora.

This is not good news. One assumes that, if Allan Odgaard could make something approximating a living by improving Textmate, that’s what he’d be doing, just as he’s done for the last eight years.

Though I own a copy, I don’t use Textmate a lot. I’m a BBEdit guy, and the XCode editor is fine with me, but lots of programmers love it. Textmate’s plug-in “bundles” were truly pioneering, and they’ve had a lot of influence.

Highly recommended at Readercon, despite the fact that Scalzi (who is, after all, president of SFWA) is not often discussed at Readercon.

Ensign Andrew Dahl, newly assigned to the starship Intrepid, finds his new job more hazardous than in ought to be. Indeed, most of the junior officers are acutely aware that, for a junior officer, being assigned to an “away team” is very bad news. The senior officers always come back, but ensigns die in countless horrible and pointless ways and they’re determined to understand why in this pleasant, metafictional romp.

Mark Anderson recently pulled the release dates from the Tinderbox release notes, put them into a Tinderbox timeline view, and then “gussied them up” in Timeline 3D. 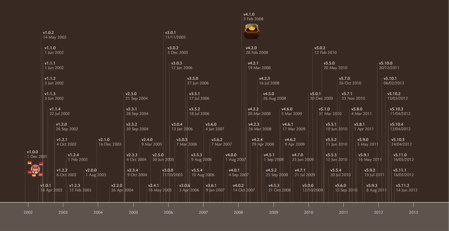 That’s a bunch of releases.

People don’t think about conferences, don’t learn what they’re for, and don’t teach their students and colleagues and friends to use conferences well.

There’s a bit of post-conference flap making the rounds. I spent yesterday building an elaborate object-oriented system that elegantly saws off the branch on which it is sitting. There are parts all over the floor of my office, payroll to be met, accounting to be done, and a campaign to be won. Some brief observations might help anyway.