At one point, I was standing next to a young woman with stars painted on her cheeks. “It seems like we do this every week,” she said. But before last November, it had been a long, long time. At one point, I was walking along with a young reporter from the Associated Press. She climbed over a Jersey barrier: no problem. I followed; my joints protested, my muscles strained, and five bystanders immediately leapt to assist. Oh dear.

A very talented fellow with a straw hat, a New England beard and an Omega button in his straw hat reminded me how effective a calm voice can be when things begin to get out of hand. Once, for example, a trans fellow got into a very heated argument with an antifa kid wearing a black bandanna: “Why are you hiding behind a mask when we cannot? You can suck my trans dick!” It threatened for a time to get crazy — and they were, after all, on the same side.

One guy in a red hat was surrounding by a bunch of people shouting “Shame!” He started to argue — I couldn’t hear — and in response a woman got right up into his face: “My body: my choice.” Good theater. After a time, though, the point has been made: it was time for him to go, and we got him safely to the police barrier where they checked him thoroughly and let him inside.

At one point, I was standing by a lonely woman whose sign called on her fellow Republicans to turn away from Trump. Not twenty yards away, the American Community Party was urging, basically, the same thing. The logical of the moment was not lost on any of us.

What good I did, though, I think mostly came from work a few of us did to help Nazis get into their little confab and then out again. They were shouted at: that was right and proper. They were denounced: what else can they expect? They were scorned. But peace and justice and the American way require that they not be assaulted, and sometimes what a moment needs is an old, dorky fellow reminded people to take a step back. 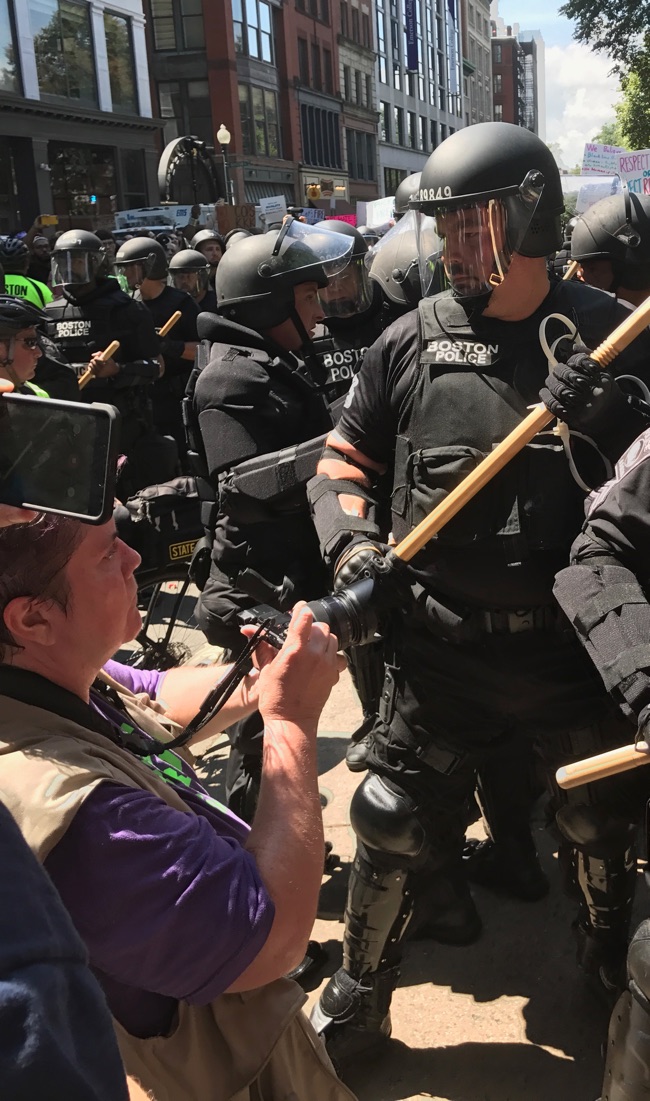 The Boston Police and the many cooperating departments were mostly sensible. During the demonstration, their visible presence was limited to the bicycle team, which sent the right message: “We’re the Scandihoovian police today; we have smiles and bicycles and short pants, pony tails and some traffic rules. Do not hit us.”

Afterward, the powers that be lost their bearings. Some of the police took out their batons, which was neither necessary nor productive. Worse, the police told nobody what they wanted to do; this meant, for example, that they spent fifteen minutes pushing people around and getting them worked up, when all they wanted to do is turn a van around. This went on for a very long time, with a huge crowd in the middle of the street; if there were effective provisions against a copycat running through a blockade and ramming into the crowd, I didn’t see them.

There was one fellow in black tactical gear, truncheon at the ready. His beard was grizzled; he must have been sixty years old. He was, generously, 5'6. I very much wanted to ask him, “aren’t you a little short to be a storm trooper?”

A few people wanted to throw water bottles; I was not alone in urging people to put a lid on that right fast. When the police vans with the departing Nazis finally pulled out, a bunch of people started to throw stuff. “Shit!” I shouted, before I figured out that there was only one water bottle and everyone else was throwing flowers. OK: I guess we can live with flowers.

The crowd was on the side of the police — at least, it had been on their side when they were the bicycle police, some of them with a flower in their lapel. When you have helmeted black knights waving truncheons around for no apparent reason while protecting racists and fascists, well, then the situation begins to read differently.