Our local Democratic Disciplinary Committee has now demanded my prompt response to "six specific allegations." Here’s a sample of two, in their entirety: (We'll discuss the others another time.)

These are not offenses against the Democratic Party: they are character flaws. Eleanor Roosevelt was a good Democrat: did she sometimes see her perspective as the only right way? How about Bella Abzug? Shirley Chisholm? The modern Democratic Party was born in a convention speech that ended: "You shall not crucify Mankind upon a Cross Of Gold!" Does that strike you as a model of modesty and open-mindedness?

Worse: these are matters of belief. How could anyone objectively prove their willingness to examine their impact? How would you know they were sincere? What evidence could they provide? This is a religious test: I am to be compelled to swear that I believe these things or I shall be removed from the Party position to which the voters of my Ward elected me.

Worse still: this could appear to be corrupt. The chair of the Disciplinary Committee runs some sort of “restorative justice” business that sells counseling services based on “examining your impact on others.” It seems I must provide good advertising and offer suitable sacrifice on the altar of this cult, or I shall be cast out to make, with halting steps and slow, my solitary way into the wilderness.

The Democratic Party is a party: a vast collection of disparate people and interests who, in general, agree to support each other in matters otherwise indifferent. Democrats are saints and sinners, wise and foolish, brave and timid. Some Democrats worship an awesome God, and some coach Little League. In the 2004 speech that made a president, Barack Obama recalled "the true genius of America — a faith in simple dreams, an insistence on small miracles." One of those simple dreams was “That we can participate in the political process without fear of retribution.” Another was “That we can say what we think, write what we think, without hearing a sudden knock on the door.”

The Malden Democrats should be ashamed. 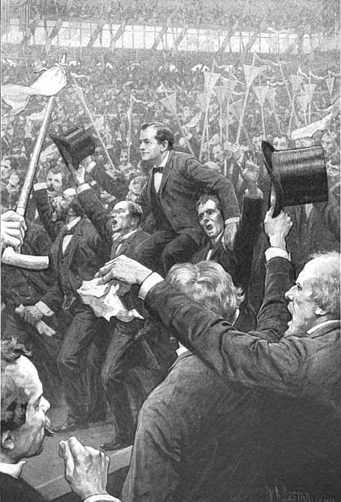 Image: Democrats, always models of introspection and humble open-mindedness, reflect on the nomination of William Jennings Bryan and solemnly ponder the harm they might have inflicted on Eastern bankers and other millionaires. McLure’s Magazine, April 1900.