An interesting point came up at last week’s Tinderbox Meetup. I was showing a fairly large and complicated Tinderbox map that I’ve been using to think about some of the intellectual roots of Tinderbox — the ideas on which Tinderbox is based. The map has about 250 notes and 150 links. Here’s a piece. 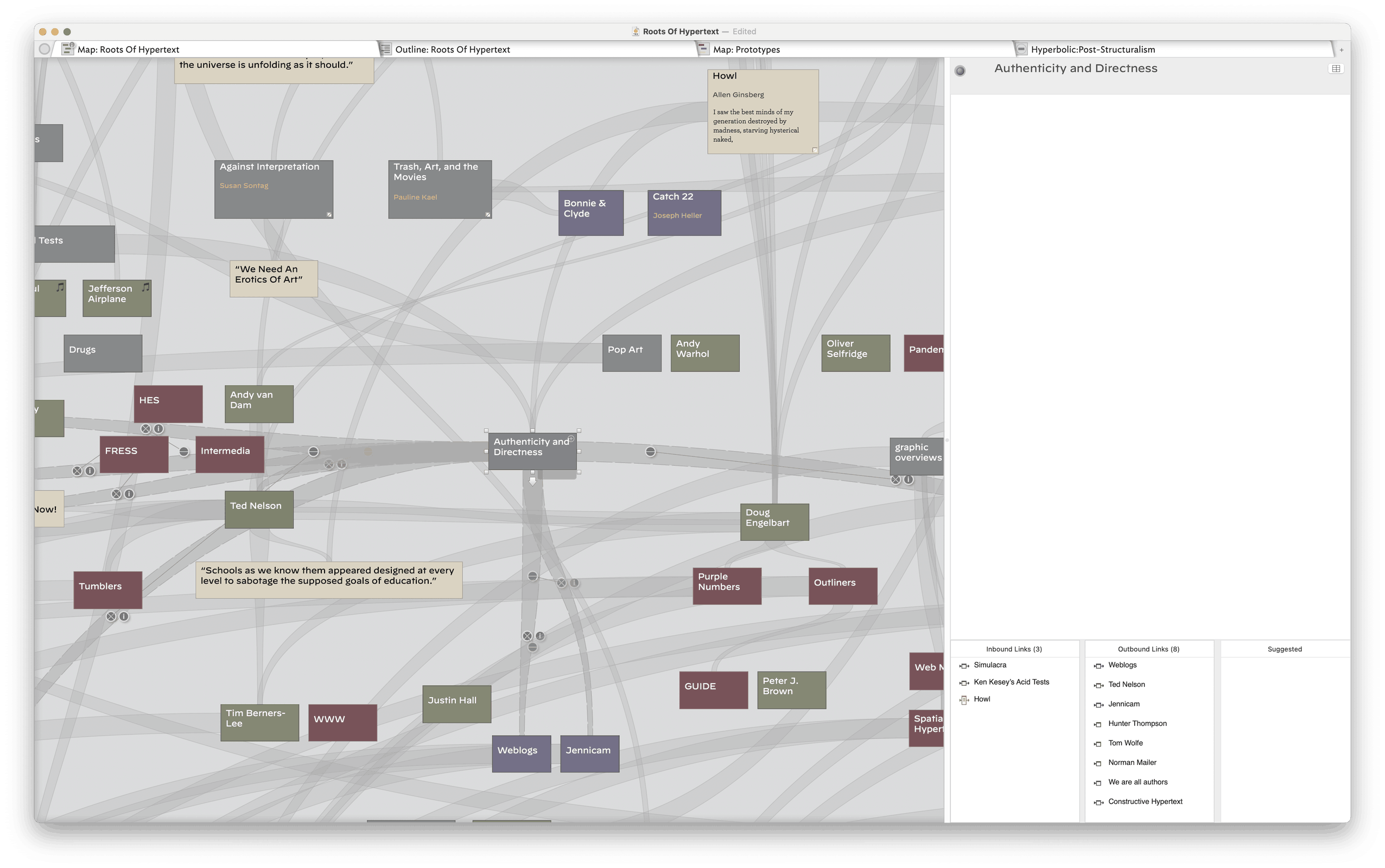 The question arose: these links are a terrible tangle! What are they good for?

In this neighborhood of the map, I’m looking at the long social discussion of authenticity, directness and sincerity. This was expressed directly and emphatically in the early Web in dozens of important ways ranging from Jennicam and live-streaming to the golden age of weblogs, but also to the development of preprint servers and Open Science that originally motivated Berners-Lee and Caillau. Authenticity is a primary concern of Nelson’s Computer Lib, and the architecture of Xanadu was dominated by the desire to ensure that links and quotations would always be authentic and verifiable. This also connects to questions of authorship and the growing sense that everyone might be an author.

Conversely, mistrust of deceitful American capitalism led many mid-century philosophers to examine new media with deep skepticism. Baudrillard, for example, wrote of Disneyland having too much of everything, everywhere — except in its parking lot, which was a literal concentration camp. The soixante-huitard and the Beats agreed that you couldn’t trust simulated experience and you couldn’t rely on what people told you was good: you might not know what was art, but you knew how you felt. That, in turn, ties into Ken Kesey’s acid tests, experiences with the loudest and densest music every performed, experienced with dancers and light shows and plenty of experimental hallucinogens.

Stuart Moulthrop gave an important paper to Hypertext ’89, trying to bring that Baudrillard work to the attention of the computer science world. It would take a decade for the message to get through. At a program committee meeting a few months earlier, I had my first conversation with Catherine C. Marshall, whose work (NoteCards, Aquanet, VIKI) is the most direct inspiration for Tinderbox. Among the topics of that conversation was an account of doing acid in the Disneyland Parking Lot.

In summary: there are lots of topics here, and lots of connections. I could extract one isolated line of influence and turn it into a neat story, but that would be a very incomplete view of the matter. I could tell you the tale that everyone tells: Vannevar Bush, Engelbart and Nelson, and then the Web. It’s a good story, but it leaves a lot out.

I’ve drawn these links in a light gray for a reason: they’re sketches and hints at connection. Someday, I may understand this material well enough to simplify and clarify. Now, it’s enough to represent at least some of the complexity.