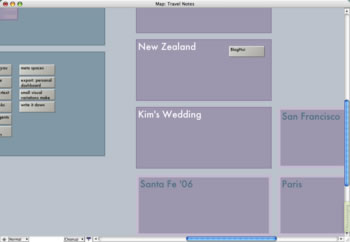 When starting a new project like this Travel Notes repository, some people dive in and add lots of data.

Others like to build the perfect structure first, with plenty of apparatus and automation. (Merlin Mann had some choice words for the application of this tactic to personal productivity at last month's Tinderbox Weekend!)

We'll begin, instead, by sketching out some very preliminary ideas, using Adornments to set aside space for some notes we want to take.

Adornments are a lightweight organizers. They organize space and describe intentions, but they represent a very slight commitment. Not sure where something fits? You can place it at the edge of an adornment, or just outside an adornment, or astride two adornments.

This is an example of spatial hypertext -- using proximity to represent a weak connection. It's also an example of the limitations of outliners: if you don't know how things need to be organized, you can't get started with the organization.

It's possible we'll revise this scheme, and revamp the map according to date. Or we might organize by region instead of place. Some other organizing principle might emerge. I don't know what I'm doing yet: the principle of least commitment advises me to sketch a simple and easily-changed organizing system and get on with the work.

We could be even simpler: why organize at all? I might try to rely completely on search. That's the idea behind One Big Text File, and also the idea behind similarity-seeking tools. I want some organization because it helps remind me what I want to think about: for example, it's good to start thinking about travel you'd like to undertake as well as travel your business and family require. If you know what you'd like, you can work for it: you don't want to wake up and realize you never saw the pyramids because you didn't have an urgent business reason for going.