I’m fascinated by Andrew Sullivan’s weekly contest, View From Your Window. Each Saturday, he posts a picture of the view from someone’s window, and invites readers to identify, as precisely as possible, where the picture was taken. The best answers are posted the following Tuesday. Here’s an example: 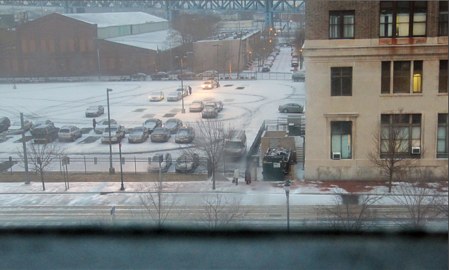 Most weeks, readers identify the photographer’s precise location. This is remarkable enough when the picture shows an unremarkable suburban street in North Carolina or an office building in Paris, but readers also manage to locate obscure villages in central Asia.

This picture turns out to be the former RCA Victor building in Camden, New Jersey. The winner pinned the exact address in ten minutes.

The winners are not professional detectives or CIA photo-analysts. Occasionally, they benefit from happenstance: one week’s photograph, a view of a college quadrangle, was solved by a student who happened to be sitting in the library from which the picture had been taken. More often, though, the solution depends on patient and clever search to identify small details: the color of the label on a recycling bin, the spackled bullet holes in an old wall, the shape of a smokestack on the horizon.

Sam Spade couldn’t do this. Sherlock Holmes could recognize a particular clay because he himself had seen the claybed, but surely could not identify mundane scenes he had never witnessed. Even the resources of James Bond would be taxed. Yet, with the aid of Web search engines and ingenuity, hobbyists routinely solve these, week after week.