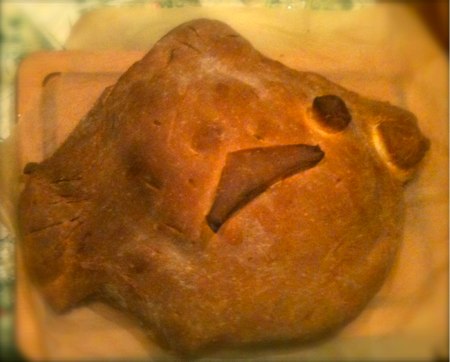 An old friend was coming to dinner after a nasty bicycle accident and surgery. She doesn’t eat meat or cheese. It’s too late in the year for really great vegetables.

The real danger is that we’ve only got two substantial courses – the ravioli and the coulibac – and both are going to be high-wire acts: I’ve never done them before, they require assembly, and both are prone to spectacular failure at the last moment.

Would the coulibac turn into mush or crumble to bits? Would the ravioli disintegrate? And what about Naomi?

The coulibac is something I’ve thought about for eons. It was in Julia Child’s Cooking for Company

, which I got in graduate school and which is a silly book from which to learn to cook. Someone really should have told me to get The Art Of French Cooking or to get something sensible. But there it is, and plenty of people on the net will lend a hand with updates and suggestions.

You’ve seen the dish in Julie & Julia, but for some reason (oh woe!) I can’t find Julie Powell’s old blog anywhere and so can’t like to her triumphal version.

The idea is to bake a fish in a bread crust. It’s a Russian dish by way of Escoffier, which explains the whimsical name and the extravagant concept, not to mention the idea of making a pastry that looks like a funny fish and that has a fish inside it.

Here’s what you do:

It was actually pretty good, and now I understand where it’s headed. Julia adds an odd mixture of fish (I was going to use smoked haddock) and paté de choux, and now I think that would work well. Note to future: season the interior aggressively. I think it would be better if it were served, as originally intended, with lots of Hollandaise. But Hollandaise is pretty in-your-face with egg and butter. Since Ruhlman says a Hollandaise can smell fear, discretion and aioli seemed the better part of valor.

is not really all that simple, but it’s very good. A smidgeon of smoked pistachio brittle gives you a changeup and another crack at the fire. And if anyone thinks it a trifle rich, they can top it with one of Clotilde’s biscuits trés chocoloates with Valrohna chocolate, cocoa powder, cocoa nibs, and a nice dollop of fiery anchos for a kick