Mozart In The Jungle (season 3)

This was weakest season of a reflection on art that always walks the edge of frivolity, but all is salvaged at the last minute when the writers remember the Mozart Oboe Concerto where it all began.

This 2011 history is large and was well-received, but I’m not convinced I see the point. A 21st-century history of the US Navy in the Solomons necessarily starts in the shadow of Samuel Eliot Morison’s History of United States Naval Operations in World War II, specifically his Volume 5 on the Guadalcanal campaign. Morison had formidable advantages: he was a Harvard historian, he was a sailor, he had personally met every US president since Teddy Roosevelt and in the war he held a presidential commission to record its naval history. Morison knew the senior officers, he had staff to track down survivors and documents, he was a terrific writer, and he’s still in print.

Hornfischer relies on Morison for a number of anecdotes and accounts. He adds some details and skips some others. He takes greater pains to emphasize the surface fleet, but Morison is hardly unjust on this score. Hornfischer a little bit more frank in drawing character sketches of the senior officers, but only a little. Morison actually knew these people; Hornfischer has to rely on the record, but Hornfischer has the advantage of not running into them at parties and reunions.

One problem with Morison, which Hornfischer repeats, is that almost every mistake and shortcoming is committed by the losing side, which in almost every case is the side with the least metal. In August, the US Navy can’t get out of its own way; lookouts don’t look out, radar doesn’t work or is installed in the wrong ships, admirals express themselves poorly. By November, it’s the Japanese navy that has all the bad luck. This is an illusion of causality: the losers remember the inept lookout and the wrong turn as a lost chance, but the winners forget them.

I wonder, for example, whether Ghormley got a raw deal. The contemporary verdict, which Hornfischer largely endorses, is that he was a timid commander, and perhaps a negligent one, a micromanager who approached a nervous breakdown before his relief by Bull Halsey. That could be right. Could you put together a case that Ghormley was under overwhelming pressure to account for every paper clip, to lose nothing, expend nothing, and above all not to lose?

Hornfischer is critical of Capt. Howard Bode of the Chicago, but Bode’s 1943 suicide makes him a safe target.

If you’re going to write a new account of Guadalcanal, it seems to me you need to take advantage of our more distant perspective. In 1949, the emphasis was naturally on violence and suffering, because the audience had been there or had known people who were there, and they wanted to know what it was like. Today, we might spend a little more time on why and how. All those freighters and support ships, base personnel and clerks were indispensable. That was a tough sell in 1949, but we’ve seen Mr. Roberts (about a freighter) and 12 O’Clock High (company clerk) and The Caine Mutiny (junior officer on a minesweeper that never sweeps a mine) now. Remember: they didn’t have computers or calculators; they didn’t even have ball-point pens.

The other thing you could do in a new account is to recognize that today’s audience doesn’t necessarily know the difference between a light cruiser and a destroyer, what either was supposed to do, or how they did it. We’re almost half as far from Guadalcanal as Guadalcanal lay from Trafalgar. We also understand how the stereotyped language of gallant sailors and heroic deeds can mask the ghastly reality, and to look more squarely at some less-than-noble actions from which Hornfischer still prefers to glance away as soon as he decently can.

Rogue One: Recruitment Poster For The Resistance

24 through 28 May, 1940 were the critical days when Britain might have fallen down the slippery slope, the m0ment when Hitler might have won. On the 24th, the British Army was encircled at Dunkirk and Churchill’s ten-day-old Ministry was tottering. Five days later, it was not yet the beginning of the end, but Hitler had not won and now he never would.

This lively and witty volume by anatomist Abby Hafer examines the question of Intelligent Design by asking, “just how intelligently designed are we?” She begins with the observation that male genitals are vulnerable to all sorts of maladies and discomforts that any industrial designer would immediately remedy, and that any magazine reviewer would ridicule. She immediately sends a letter on the topic to her Unitarian minister, who used the argument in a sermon on Faith and Testicles.

In fact, it would be easy to design people better. Kangaroos have a much easier time with childbirth. Rabbits can eat wood; people have the organ that lets rabbits digest sawdust, but in people it functions only to give us appendicitis. Our ancestors negligently lost a crucial mechanism for producing our own vitamin C: most mammals make plenty of the stuff but monkeys, awash in tasty fruits, didn’t notice that they were broken until they moved to Norway and got scurvy.

Katniss At The White House

I have wanted to be a White House intern ever since November 8, 2016. That night, my younger sister looked up at me and said, “What are we going to do, Katniss?” and I got out my computer, made a user name and password, uploaded my high-school transcript, and turned to her and said, “Go see if Peeta has any thread and old bread sacks, because I’m going to need business-casual clothes. And a recording device.”

“I’m pleased that soon the manufacturing jobs will be coming back to District 12.”

A fascinating movie by Myroslav Slaboshpytskiy about a school for deaf children in Ukraine and shot in sign language, without subtitles. It’s an uncompromising and deeply pessimistic film, featuring some extraordinary long shots – in both senses of the word. 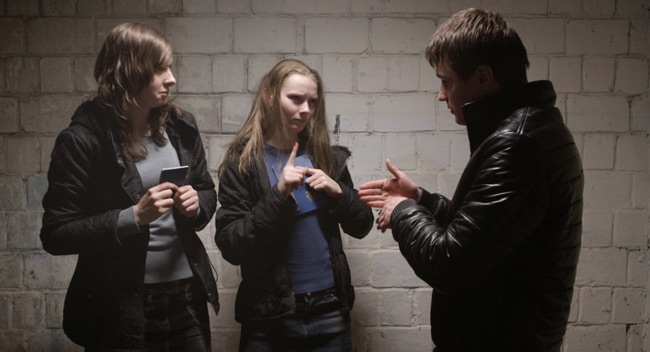 Larissa MacFarquhar, in the New Yorker, offers a compelling account of an unexpected phenomenon: quite a few people who have spent decades in prison for serious and violent crimes are getting out and getting into good colleges – where the excel. Unexpected sidelights abound, including the literary tastes of convicts. In California, white felons read Shakespeare – especially Julius Caesar – and the epic sagas. Black prisoners are expected to master a different literature. “Rodney Scott thought it was pretty funny that several of the books that in prison could get you thrown in solitary, because they were a sign of membership in the B.G.F.—Blood in My Eye and Soledad Brother, by George Jackson, Eldridge Cleaver’s Soul on Ice—were required reading in courses at Berkeley.”

The Death Of Sweet Mister

This eight-hour film – it’s a film, not a series – builds to a single, inevitable, final word. This is the story of an artist who is called upon to create the one piece for which she has been made, by an unspeakable history, completely unsuitable. A few shots and a few scenes are held painfully long, but almost everything of importance is told elliptically and with concision.

It begins with a long, long shot in which a silent girl escapes Pittsburgh before dawn and takes that old familiar bus trip that ends with her NYC audition.

It all ends with a long, long shot in which she refuses to speak, and then – at last – says one word.

Daphne, Polyxena, and a long conversation

A correspondent got me to thinking about the long literary discussion and Those Trojan Girls.

The Trojan Women, you’ll remember, concerns the aftermath of the Trojan War. Specifically, what’s going to happen to the widows and daughters of Troy’s vanquished heroes? They will, of course, now be divided up as slaves and servants of the victorious Greeks.

In Seneca’s version (~54CE), Queen Hecuba’s youngest daughter is allotted to Achilles. The allotment of slaves to Achilles had previously caused a bit of trouble and unhappiness: that’s the Illiad. We are not going to stir that up again, nor sir, not even though Achilles is dead. So Polyxena will be executed on Achilles grave. It is the very definition of pathetic.

I think this can also be read as a response to the male gaze in Ovid’s Metamorphoses (<17/18 CE). There, Daphne carelessly or thoughtlessly lets herself be seen undressed, and in the end must turn herself into a tree. Daphne is the original blonde horror victim to which Buffy The Vampire Slayer responds. But Seneca is emphatic to note that Polyxena takes care, even as the priests sacrifice her, to make sure that her clothes remain demurely arranged; as a teenager she comprehends the male gaze and as an independent, strong feminist she takes steps, even in this most extreme of situations, to hold it together.

This isn’t what happens to my Polyxena in Those Trojan Girls, but I’d not thought about this particular bit of literary repartee before.

On Flesh and Bone

Mozart is supposed to be about music, but it’s really about life and the arts. At Web Science 2013, Cory Doctorow said that no one should work in the arts unless they must; that, pretty much, is the argument in Mozart. Mozart has a lot of empathy for people who don’t have that choice.

Flesh and Bone (I've seen only the first episodes) is supposed to be about dance, but it’s really about damage, about bodies and the way things go wrong. Its characters make sacrifices, but those sacrifices are to their compulsions and their fears, not to their art. Lots of the damage isn’t a choice or a sacrifice. Everyone, it seems, is more or less damaged.

It’s not exactly pleasant. The dramatic premise of the first season, apparently, places a vulnerable and sympathetic dancer into precisely the situation with which she cannot hope to cope, having been cast into a ballet about a subject she dreads under the direction of teachers who cannot fathom the difficulty. The teachers, in turn, are former dancers with physical and emotional scars accrued over decades; they cannot imagine what pain this girl could possibly possess that could equal theirs.

The whole thing balances precariously. Make this much less horrible and you're trivializing sexual trauma, abuse, and pain. Make it any more horrible and you’re appealing to sadists.