Avalon (the 2001 film by Mamoru Oshii, not the 1990 Barry Levinson film) is perhaps the one game movie I've seen that has something important to say about immersive games. (netflix) 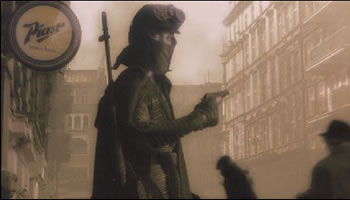 It's the story of Ash, a VR gamer in a post-apocalyptic Eastern Bloc country. It nods to lots of old, familiar forces -- the drive to be the best player, the desire to find the hidden level at any cost, the allure of a virtual world that is better than reality. These are familiar to game theory, Oshii shows them nicely, but they aren't the point.

Very, very quietly, Oshii shows a hint of a game world that can create deep emotional resonances beyond the excitement of flow, the musical groove of the pinball wizard. It's not about social software -- Ash is a loner in a software environment that demands collaboration. It's not about sex; Ash is sexy in the real world but covered in a body-armor chador in the game.

Avalon shows us how games could be about recognition and humanity, about the sense of the uncanny -- of meeting something familiar and human that you've never quite seen before, of seeing something you see all the time transformed into a completely different kind of signifier. Games could do this -- they haven't, but they could. It'd be worth trying.

(I think it was George Landow who put me onto this. Avalon really should be the talk of the game theory world.)

Avalon is also interesting as a comic; the pictures move, yes, but it's conceived and written as a combination of text and image, not as a film. The filmmakers are Japanese, the actors speak Polish, and the film was made for Hong Kong: nobody is really supposed to hear the dialog and so almost everything needs to be carried in the sound effects or pure visuals.

Is the dark-haired woman with a streak of gray an allusion? I notice it shows up in Nowhere Girl as well, a very different comic with a sometimes-similar approach to art direction. Did I miss a cultural moment or something?