Jill follows up on Profgrrrl in exploring what to say when people ask:

The original question dealt with people dropping by your office at the university, but let's look at the bigger (and more common) scenario of conferences and trade shows.

Both Jill and Profgrrrrl are wrong, IMHO, about dressing to blend in. At conferences, you don't want to blend in: you want people to notice you and to remember you next year. It's best to be famous in the field, but if you aren't, being "that very tall guy from Harvard" or "the young woman from Oxford who had bright green hair and some preliminary data on Kayenta polychrome" is better than being forgotten. 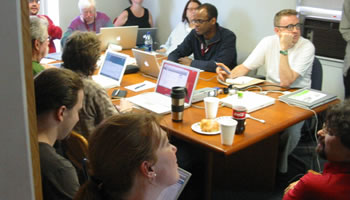 Tinderbox Weekend Boston
on this date |