My phone is ringing this week with calls from Tinderbox people who are starting new books. I'm sketching one, too. The response to The Tinderbox Way has been simply overwhelming, and I find that indeed the book on paper is not everything I wanted, or at least not everything I have to say. Zadie Smith has a nice essay on literary reach in The Guardian:

Something got in the way, something almost impossible to articulate. For example, when it came to fashioning the character of the corrupt Hispanic government economist, Maria Gomez, who is so vital to Clive's central theme of corruption within American identity politics, he found he needed something more than simply "the right words" or "knowledge about economists". Maria Gomez effectively proves his point about the deflated American dream, but in other, ineffable, ways she seems not quite to convince as he'd hoped. He found it hard to get into her silk blouse, her pencil skirt - even harder to get under her skin. And then, later, trying to describe her marriage, he discovered that he wanted to write cleverly and aphoristically about "Marriage" with a capital M far more than he wanted to describe Maria's particular marriage, which, thinking of his own marriage, seemed suddenly a monumentally complex task, particularly if his own wife, Karina, was going to read it. And there are a million other little examples ... flaws that are not simply flaws of language or design, but rather flaws of ... what? Him? This thought bothers him for a moment. And then another, far darker thought comes. Is it possible that if he were only the reader, and not the writer, of this novel, he would think it a failure?

So, I'm spending a good part of the day helping people to get their book notes launched, and another part musing about how to use Tinderbox to think about a book about the natural history of links. At the very least, it’s leading to some interesting reading, from Thomas Ricks’ Fiasco

to Vivian Gornick’s The Situation and the Story

But there are lots of interesting angles to explore — not at displacement activities to delay getting down to work, but preparing the field and making sure that the imminent battle is worth the effort. For starter’s, there's a space I think of as The Wall, a place to tack reminders and precautions. When Michael Ruhlman wrote The Making of a Chef, he had a quotation from his uncle on the wall:

Art in the service of the potato.

A good place to start. 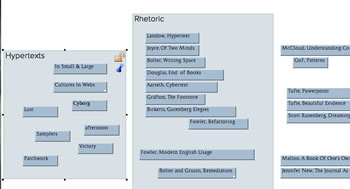 A Tinderbox map of some references helps plan research, reveals gaps, and can suggest what needs to be done first. An infinite whiteboiard can be a handy thing.
on this date |