At the ART, Robert Woodruff's farewell production rescues Racine’s cobwebbed tragedy and finds, if not a fresh classic, an extraordinarily interesting and exciting play. Don’t miss this production if you’re in Boston; well worth a drive if you’re in New England. 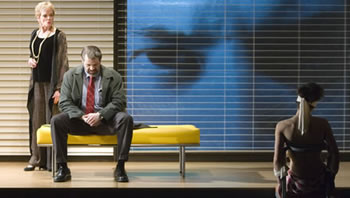 Has anyone observed how Bush and Nero will occupy roughly similar places in the history of their empires? Both were born to be courtiers, sons and nephews of power, and both were thrust unexpectedly into power as a dynastic improvisation. Neither seems to have wanted office terribly; Nero would much rather have been an artist. Both secured their popularity by launching massive programs to root out religious terrorists. Neither worked very hard at leading the country. Both surrounded themselves closely with a circle of personal and family advisors who did most of the work and who sheltered the boss from dull details. Each relied on an experienced and popular military expert — Sextus Afranius Burrus and Colin Powell — who eventually came into conflict with the family cronies and was then sacrificed.

One difference, of course, is that Nero gets extraordinarily bad press because his policies opposed the aristocracy and the aristocrats wrote the books, while Bush has been extraordinarily friendly to the aristocracy in an age when the populares do the writing. And while Bush’s psychological issues with his family may be the stuff of great drama — and Colin Powell’s career-ending UN speech is certainly the stuff of tragedy — the Julio-Claudian family was special. Imagine the Kennedy's, Bush’s, and Hilton’s all rolled up into one.

Does anyone else remember MacBird?