Apparently, I overlooked this intriguing survey of maps in hypertext fiction, from Marie-Laure Ryan.

The GPS applications  described above may be a passing fashion, and they will probably never become a dominant mode of textuality, but they signal the possibility of a reconciliation of real space, in which GPS texts are anchored, and cyberspace, from where they come to us. In order to reestablish  a connection to place, location-specific texts  sacrifices  mobility, since they can only be downloaded from a certain area. But if they renounce the postmodern nomadism of their Internet companions, they make us rediscover the world, by insisting on being read in the presence of their referent.

Texts that insist on being read at a specific place are not without precedent. 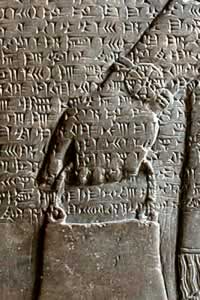 People have been doing complicated things with mixing image and text for a long time too, and coping with all the graphic-design complexities that entails. This is from Pergamon. It's now in Berlin, where I hear Sylvester had a nice party.

I'm not arguing that there is nothing new under the sun, or that new media were anticipated by old media. That's boring.

I'm not arguing that new media aren't new. That's boring, and we know it's untrue.

But finding what is really new in new media depends crucially on finding what we admire, what we find inspiring and exciting and important. If the most excitement we can muster "may be a passing fashion", perhaps we're looking at what is, for us, the wrong frontier?