We spent the afternoon of New Years Eve at the Decordova, seeing a huge collection by Finnish photographer Arno Rafael Minkkinen. Minkkinen travels all over, and then takes pictures of himself nude against the landscape. The images are often elaborate visual puns -- feet over the abyss, or head underwater, or quotations from Adams or Stieglitz with a bit of the artist's anatomy thrown in for good measure. Others are experiences in themselves, like the series of the artist lying on snow and ice. 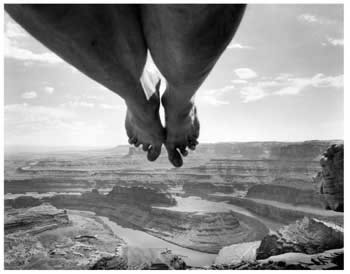 Minkkinen, interestingly enough, keeps elaborate notebooks in which he sketches what he intended to do with each image. Often, the image won't actually do what he wants -- he concocts these spontaneously, he doesn't travel with a crew, and so things don't always turn out quite right -- so the sketchbook reminds him of things to try again, somewhere new.

Minkinnen is hard on himself -- he seldom shows a lot of the body, and when he does, it's often an uncomfortable body -- which may be one reason I found his occasional figures studies of women in the landscape made a pleasant change.