I’ve become a great fan of Andrew Sullivan’s View From Your Window Contest. Every Saturday, he posts a picture taken from somebody’s window. People look at the picture and try to figure out exactly where it is. The following Tuesday, he posts the best answers. 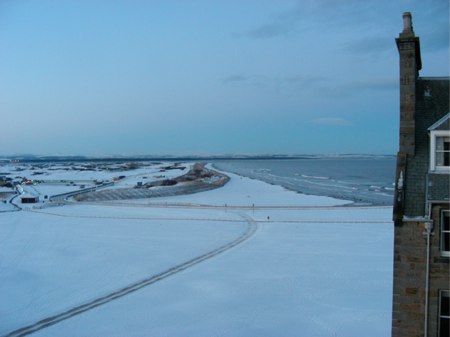 I’ve given up actually playing the game; instead, I play what ought to be a simpler game: how close will people get this week? The possible categories, from experience, are:

Even here, I'm often wildly wrong. Take this week’s picture: there’s nothing to much to see! Two wintry roads. A shoreline. Snow. Some distant hills. A hint of an estuary. There’s not a whole lot of building here, so it might not even be the sort of place that has addresses. Could be Prudhoe Bay, Alaska. Could be somewhere on Lake Erie. Could be somewhere in Norway, if there’s anywhere that’s flat enough. Wouldn’t Iorek Byrnison of Svalbard

look at home here? Surely, there’s just not enough data here to get the exact location.

Wrong. Not only did someone figure out the exact address, lots of people did. Several got the exact window – and sent in a photograph of the building with the window circled.