What was Chaco, anyway? This challenging collection of specialist essays offers many answers, but they suggest the emergence in the last few decades of a remarkable new consensus: the end of Chaco was not a drought or a migration or a transfer of power amongst peer polities. It was a revolution.

What are the Pueblos? One thing we has seemed certain about the Southwest since Coronado: this is not Mesoamerica. There are hints of similarities and influence: ritual use of Macaws, turquoise, and cotton, and urban concentrations that, in the Southwest, are spectacular for their massive masonry if not their population. 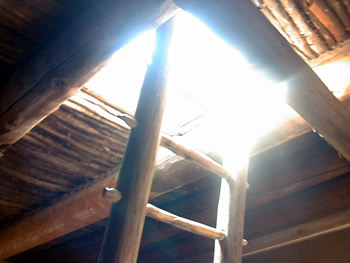 Mesoamerica is step pyramids and kingly priests, ballcourts and bells and conquests. The Pueblos frown on hierarchy, deplore violence, and don't play ball. Pueblos have Kachinas and clowns, not terrible serpents or Huitzilopochtli. There was a fashion on the 80's for suggesting that Chaco was, or was influenced by, a Mesoamerican trading outpost of some sort, but the in time that fell out of favor.

The new synthesis begins with a realization that we can recover some, admittedly slight and imperfect, hints of the ideological situation from mute material remains. Lekson's wildly brilliant Chaco Meridian plays a role. And now, from field surveys and close examination of familiar sites and their surroundings, come a set of remarkable proposals.

Kivas in modern pueblos are ceremonial. Lekson argues that small round rooms at Chaco aren't yet ceremonial: they're residences. To be precise, they're palaces, built with great formality in the Old Official Style. So we don't have vast apartment buildings surrounding a few ceremonial kivas in the courtyard: we have a few prestige residences in the courtyard, built underground (because that's the way it was done in the old times) into raised platforms and towers, so you have underground palaces that everyone can see. And, behind them, we have — what? A storehouse? A ceremonial backdrop? What?

My own wild idea: there's a section of the oldest part of Bonito that was used for elite burials. Nearby rooms had collections of valuable and esoteric objects. It's a very visible place, but with controlled access, at the center of what was for centuries the chief pilgrimage or tourist destination of the region. Could it have been a museum?

There seems to have been a vast, circular amphitheater between Bonito and Chetro Ketl. Archaeologists always assumed it was a space, a gap between whatever these two great buildings were. It now looks like this was a vast public performance space with engineered acoustics, a perfect circle that just touched Bonito, just touches Chetro Ketl, and just touches the wash.

There were platform mounds. There were enigmatic ritual roads, far too long and too broad and much too straight to every repay the effort of their construction. There seems to have been a ballcourt: the Chetro Ketl field would have made, it turns out, a very bad cornfield but an excellent raised platform for ball games. (It's also possible that this was something else, perhaps a set of ponds for industrial production of frogs. The prehistoric Southwest is like that: maybe a sports stadium, maybe a factory for frog legs.)

And there were pyramids. Pyramids! Two of them, built by modifying and refacing natural hills, with long, broad ritual stairways ascending to McElmo structures on their top.

In short, Chaco looks, suddenly, very Mesoamerican. And then, at its end, something happened. Something big, and fast. To the South, centuries of Mimbres decorated ceramics come to a sudden end: instead of sacred pots decorated with animals and ritually buried when they wore out, people started to paint their pots black. The entire Chaco region seems to have been abandoned.

Chaco broke up, or moved. Kachinas appeared. Kingly priests and terrible, high-stakes games become cautionary tales told in winter. We aren't like that, the stories say, we don't do things like that, and we never, ever, use such symbols.

Stein et al., in their article, make interesting reference to oral traditions preserved by Navaho hataali about Chaco and 'The Gambler'. If we read Chaco's end as a revolution or ideological rejection, and if there's still a memory of those events, they would have been fresher in 1680. It might be interesting to see what hints might be sifted from surviving rhetoric of the Pueblo revolt, or the 1700 sack of Awatovi.