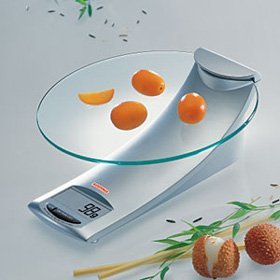 Making bread used to be a Big Deal that I did every year or two. Then I read Ratio.

. You don’t need to have one, but it makes life much easier.

Put your bowl on the scale: press a button to zero it. Add 20 oz. of flour. (I throw in a cup of whole wheat; it makes Linda happier) No sifting, no fussing. Linda, watching me, said “You could maybe use just a little care when you measure!” But I don’t need to: the scale tells me when I’ve got 20 ounces.

Then, push the button again to zero the scale. Pour in 12 ounces of water. You don’t need to measure; I use a measuring cup for old time’s sake.

Then, throw in a couple of teaspoons of salt, a teaspoon of yeast. Or a whole packet of yeast — doesn’t matter. I squirt in some honey. Mix well. (Don’t break your wooden spoon, like I did; the splinters are nasty. Use the spoon until it gets too thick, then user your hands. Takes two minutes, tops.)

Let it rise for a while. Couple of hours? Sure. Last one, I let it go overnight and it was fine. Punch it down, form it into a ball, put it into an oiled dutch oven. Let it rise some more. Then pop it into a 450° oven — covered for 30 minutes, uncovered for 20 minutes. You’ve got a nice loaf of bread.