There’s a fracas over at Wikipedia. The Wikimedia Foundation Office banned Fram, an experienced and highly-respected administrator; this was unprecedented. After review, Floquenbeam — another prominent administrator, lifted the ban as an act of civil disobedience. Floquenbeam was banned. More of this ensued, and the carnage continues.

Ward Cunningham’s Wiki Way lies at the heart of this conflict, though I doubt many people see that. The core question in this mess is a conflict of two views.

To high-ranking volunteers, the radical egalitarianism of The Wiki Way is the project’s core idea. To the Office, it’s a footnote to prehistory and they’ve got a business to run.

All Politics Is Local

For the last 18 months, I’ve been deeply embroiled in a long, local political struggle. That struggle ended unexpectedly, Saturday morning, in a satisfactory compromise.

I’ve not written much about this here, because this fight was very local and most of my readers are not. It’s not obvious that scholars in Amsterdam or authors in Adelaide would be interested in a small political committee in a small American city. On the other hand, I think some aspects of this mess might have some general interest.

The problem: The Malden Democratic City Committee is elected every four years by voters in the Democratic primary. It had, for some years, been tiny and obscure if not secretive. More recently, it’s been the vehicle for holding two parties a year, and having nine Saturday morning informational meetings. It doesn't endorse candidates or take positions on issues or raise money for immigration lawyers or #BlackLivesMatter, for @abortionFunds or ACLU.

I felt the proposed bylaws set the quorum too high. Robert’s Rules says, sensibly, that the quorum should be the highest number of people who can be relied upon to attend every meeting, unless the weather is very bad. The proposal’s quorum might be reached once every year or two.

Why did it matter?

In the US, only two political parties can matter. One of those parties has gone nuts. We’re the other one.

The US stands today on the threshold of fascism. That seems incredible. It must have seemed pretty incredible in Kishinev back in 1903, or Berlin in 1933, or Vichy in 1942.

Today, we deplore those who did nothing. Yet we — the representative body for the Democratic Party of a city of 60,000, a city that should be a Democratic powerhouse, a city where swastikas keep popping up — we hold two parties a year.

So many reasons why

Why was this so important? Why would anyone care so much about a quorum proviso in a set of small-town bylaws?

At first, I wasn't sure why it mattered. On reflection, I found six million reasons. The shadow of Manzanar and Minidoka as well, of Gila River and Bosque Redondo. The graves of Camp Logan and Tulsa, the specters of Harlan County and Haymarket.

A country goes Fascist two ways: gradually and then suddenly.

Perhaps it can’t happen here, and all this will blow over. We’ll tear down our concentration camps for toddlers, write reparations checks to the families we tore apart, make Pride a national holiday, restore science, replenish the courts, rejoin the Paris Accords.

Still, it is better to be able to act and find that you don’t need to, than to need to act and discover that you cannot do enough in the time you have.

Leadership wanted a quorum of 20%, which could be as high as 56. I proposed a quorum of 12. After a long and bitter fight, we wound up at 20 — a number that should be workable.

On the final morning, I fully expected to lose.

I worked hard on this for a very long time. I wrote many memos, lots of emails, a newspaper op-ed, handouts and flyers. I ran a long, long Facebook campaign. I wrote three full-dress speeches. I got a haircut.

I lost friends. One neighbor who used to come to dinner all the time now calls me “jerk” and “asshole” on Facebook. A sign that I’m not cut out for politics is that this bothers me.

Nobody seems to have done what seems to me to be the very first thing our opponents ought to have done: find out why the hell this mattered so much. In retrospect, I suspect they still don’t know, or understand why it would have been useful have found out. I don’t think the calculus is hard. I tried to tell everyone who would listen, and many who would not.

Once upon a time, six million tried to get along with neighbors who disliked them.

I’ve been very angry at some of these many meetings. This is bad politics: people don’t like anger. At the very beginning, the sage of the Malden Democrats took me aside. “It’s not that they don’t like your ideas,” she told me. “The problem is, they don’t like you.” She was not wrong.

Amity is a suspect quality, and we used to understand the limitations of being well liked. 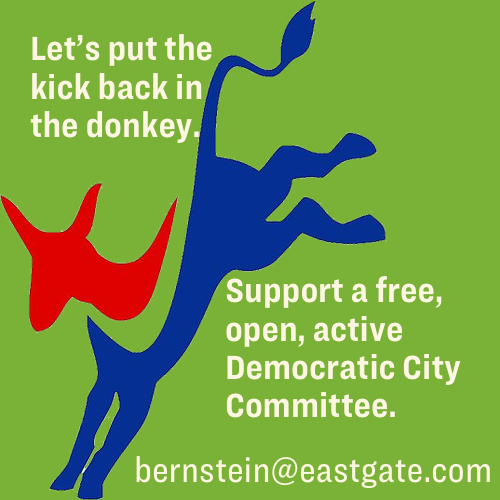