Emma Bull's 1987 War for the Oaks descibes the war in Faerie for possession of Minneapolis, Minnesota. Reading it in Rome, I was struck by the impression that the entire genre of elfpunk is really about the way intelligent and sympathetic Europeans and Americans view each other today. (This categorie excludes the Bushies in the US, of course, and the most virulent left and right-wing culture hawks in Europe)

The denizens of Faerie are achingly beautiful and dress really well; Americans who stroll down the streets of Paris or Milan have the same feeling.

Elves (and vampires) possess an ancient culture, bound up with arcane customs and incomprehensible courtesies and rituals. They make and own beautiful things, they treasure nature, and to them nature is cultivated, tamed, and comfortable. They have hereditary titles. They have great sex.

To the faerie court, mortals often seem ignorant, inexperienced, and clumsy. But mortals are also endlessly fascinating and strangely alluring; without the strictures of tradition and custom, mortals create things of which faeries never dreamed. Their art has raw power and excitement, and by elven standards the mortals have a charming directness, enthusiasm, and simplicity. Mortals are puritans, afflicted by strange conflicts about their bodies. And even the most powerful members of the faerie court always sense that this is the age of mortals, that mortals are somehow at the center of things. 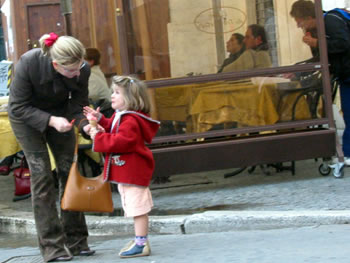 Mortals can't understand why ancient faerie rivalries matter so much, why the Seelie and Unseelie court need to fight their interminable war. Why not just sit down, work it out, shake hands, move on? To immortals, this seems foolish and naive -- except that for some reason it appears to work for mortals. The American Civil War was horrible, yes, but once it was over, it was over. In Faerie, they remember these things and keep their anger fresh. The elves would still support guerilla bands in the Appalachians, they would hold armed marches, riots, and bombings to honor the memory of Tippecanoe and the Battle of Quebec.