The Flemings have two charming alpaca, Zach and Cherokee. After meeting these kindly camelids, I might have alpaca too, if I had the requisite grass, space, and climate. 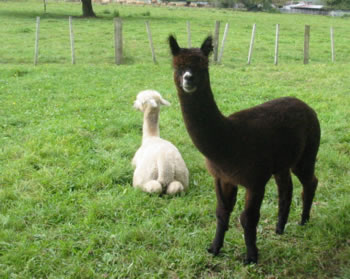 When the alpaca are paying attention to you -- when, for example, you're holding an apple from the tree that's just outside their pen -- they look at you and make sure you know they care about you. When they aren't paying attention, they make it clear that they're doing something else right now. Being gentle, kindly, and helpful beasts, they'll be happy to pay attention to you if you want, of course.

That's a lesson for airlines and hotels and customs officials. Coming into the US seems to get worse and worse.

It's only really annoying if nobody seems to care much, if they delayed your bag or inconvenienced you because they didn't feel any particular interest in paying attention.