The Amazon meets the great Rio Negro at Manaus. 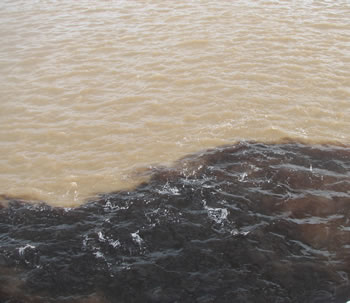 The Amazon flows quickly and is filled with silt from the Andes. Many of its tributaries are fast, silt-filled rivers, too.

The Rio Negro, like lots of other Amazon tributaries, drains a large basin (and so it's a large river) but it's not a mountain river and it doesn;t have much silt. Because the rainforest soil is poor and thin, plants have a hard time growing: leaf growth is about 50% slower here than in other regions. That’s one reason these energy-rich, nutrition-poor plants have evolved such a potent biochemical vocabulary; when you've got lots of sunlight and need to protect every leaf, it makes sense to synthesize all sorts of toxins and insectides and thorns and anything else that might help. Evenetually, all those leaves fall into the river, which becomes a dark biochemical tea.

When they Amazon and the Rio Negro meet, they run side by side in the same river bed without much mixing for many miles.