Evening on the Amazon

We left Boston on Friday, spent the evening walking along Miami's South Beach with an astonishing number of Spring Breakers and snacking on Moqueca at SushiSamba, and by evening the next day we were tootling up the Amazon and Santarém was far, far behind. 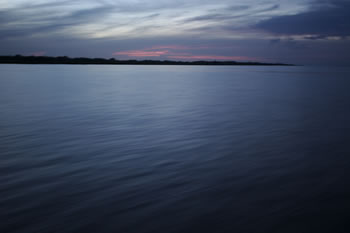 The four of us were the late-arriving and mysterious Outsiders -- the ten fellow travelers who made up the roster of our jaunt all knew each other and had already negotiated supplies and endured the great bed-linen flap. Nobody was paying much attention to the Fork-tailed Flycatcher sitting on a telephone wire on the pier. I was nonchalant about it. I've seen one before: in 2001, one of these birds flew North for the winter, got mixed up, and landed in Newburyport instead of Brazil. In Boston it's a celebrity; in Santarém, it's just a bird.

But all that was squared away, and after a brief delay as our Guide's passport formalities were formalized by Authorities eager to see that every T was crossed, we found ourselves in the middle of the immense river, silent when we weren't colliding with stray, unseen logs. (I slept amazingly on the Amazon, not even noticing when great floating logs slammed into the bows a few inches from the bed and roused everyone else on board.)

The night was black, the stars dramatic, the Southern Cross shining above other equatorial horizon. A few cooking fires occasionally flickered on the river bank, and our own search light stabbed out into the river from time to time. At dawn, the river was chocolate brown, rich with the silt of the Andes. 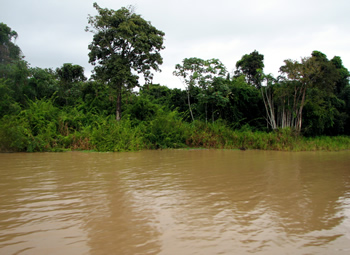