Who is this scientist? 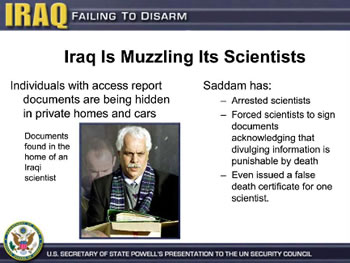 Who is the scientist in the picture?

We now know that this slide’s argument was based almost completely on source Curveball, a purported defector who was actually a disinformation agent of Ahmed Chalabi’s exile group. Powell thought this was a sound source at the time, backed by other sources, but all the information turned out to be planted and almost all traced back to Curveball.

But surely this isn’t a picture of Curveball himself: you aren't going to take a highly secret source on whom so much depends and literally broadcast his photo on television. But I assume it’s not just a picture of a nice man with books, lifted from Corbis or Getty or istockphoto.com .

But what could it be? Either it’s a confidential source — an ex-Iraqi nuclear scientist — or it’s not. If it’s a source, why are we telling everybody? If it’s a stock photo, what is it doing on the slide?

I bet this can be found out — and the method for finding out will itself be an interesting new media question. Got an idea? Email me.

"Update: The scientist in the picture is physicist Faleh Hassan, whose house was searched by UN weapons inspectors in 2003. BBC. 'Mr Hassan insists [the papers] are part of his private research and from doctoral theses of his students at Baghdad University.' I wonder how things go with him now. Winning strategy: Ken Tompkins found a similar PowerPoint deck online at the US Embassy to Thailand, which credits the photo to Reuters. That suggests the subject must have been covered in the news, and a Google Image Seach for iraq scientist nuclear papers home yields the name and Image search for Faleh Hassan gets plenty of pictures."