What the frack WAS Kara Thrace

It was amusing to watch the collective twitterings this morning at search.twitter.com/search?q=%23bsg. Not very much intelligent discussion, alas: people mostly confined themselves to expressing whether they liked the finale or not. Ebert calls this Himalaya Criticism: “loved him, hated her.” 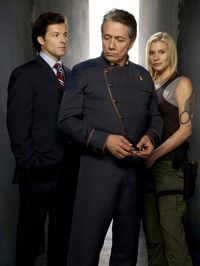 Best coverage, with extensive interviews, by Maureen Ryan in the Chicago Tribune. And she was the first to get into print, I think, the crucial key:

"I was perfectly at peace with the disappearance of Starbuck. I didn't know why until the day after the finale, when I was walking down Madison Avenue in New York City and it hit me like a thunderbolt.

The Father, the Son and the Holy Ghost.

And why, after all this, do we suppose that it won’t simply happen again? Yet another cycle of war and destruction, as we once again begin to build robots?

Because this time, we know in our bones: we were slaves.