Death and the Powers: The Robots’ Opera 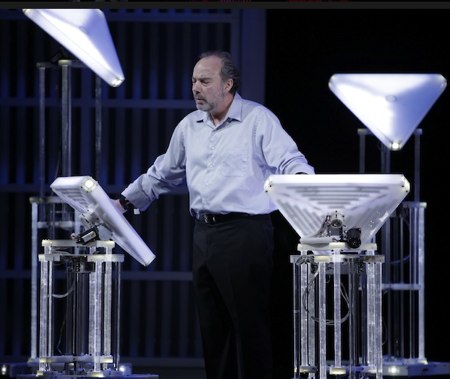 Ten years in the making with a stunning cast, vast resources, and generations of Media Lab expertise, this opera gives every impression of not having been though through.

Simon Powers (think Tessier-Ashpool or John Galt), a wealthy, dying technocrat, stands with his family at the edge of Singularity, driven by imminent death to leap into the Machine. At his side are his sensuous third wife Evvy, his adopted cyborg protégé Nicholas (Andrew Undershaft crossed with headmaster Negroponte), and his lovely daughter Miranda.

Powers wonders if life outside the body is life, and if it’s worth living. So do they. None of the characters seem to have given the issue much thought. Now they must, because Simon is out of time. These are not new questions. Plato asked them. Visual allusions to HAL and The Matrix (and perhaps to Star Trek’s The Changeling) and the story’s debt to Neuromancer provide the only obvious evidence that the creators know this. But of course they do: they simply pretend not to know.

Simon’s translation into the world of light creates a global economic crisis, personified by The Miseries, a crowd of desperate, grasping, silent zombies who appear to threaten Miranda as she hesitates to go where her family has already gone, into the System. These are the Little People who Hold Us Back. I guess these represent the people who buy the hundred dollar tickets, contrasted with the backers behind the Monaco art foundation FUTURUM  which funded the effort.

Once in The System, the great man is uninterested in the world, untroubled by "famine, war,/the exploitation of children/the whole planet". Simon has all of eternity, but he cannot spare a few minutes for the United Way and the United Nations:

How can I be selfish

When I’m not even a self?

I’m bored with you all—

All that world of meat.

It’s my flesh and blood that I love.

I will rescue my flesh and blood

From bondage to flesh and blood.

Now leave, your time is up.

This isn’t even coherent. Simon is now a being of light, a ghost in the shell: if he’s bored with the world of meat, what’s the deal with his flesh and blood? If this is irony, to what end? And what’s the rush? He is All: why not do a favor or two, or at least clean up some of the mess he left behind? And if Simon has seen 2001, might he not be a little concerned about his power switch?

Would a disembodied intelligence care about people? That question has been asked, too. Clifford Simak, Isaac Asimov, Charles Stross, Phillip K. Dick, Robert Heinlein, and Alan Turing explored this in work that is, I wager, familiar to just about every one of the seventy young MIT engineers who worked on this production.

The politics, if taken seriously, are repellent: the world – personified by the Administration, United Way, and United Nations – stands begging the financial titan for aid, hoping he will repair the economic catastrophe he has precipitated. Simon Powers sings:

A name is a made-up thing

That proposes someone is real.

A machine for designation—

That’s what any name is.

My name is Simon Walter Powers,

It proposes I am alive.

And the immortal Walter Whitman,

And by the way,

I have billions of bucks,

Why do the Administration and the United Nations stand before this Powers, begging for a moment of his infinite time, pleading “with respect” that they need more than a few lines of poetry? They can solve this easily: money is a social construct, the economy is bound by law, the law serves people, and the people can seize, or tax, or simply eliminate those billions of bucks. There is no problem here: there is no spoon.

Composer Tod Machover is a disciple of Elliott Carter, and the score is intricate, challenging, melodic, and relentlessly difficult. I think I might once have detected an allusion to Mendelsohn’s Elijah (“Answer us!”), but then again, maybe not. Robotic intelligence has not been a favorite musical subject, but again there seem to be plenty of interesting ideas we could call upon.

Machover says he’s interested in melody and wants to expand the audience, but this audience had better be ready to grasp his melodic line at once: if you don’t catch it now, you’re not going to hear it again tonight.

The dancing robots are really terrific.