There was a bicycle ahead now, very much in the way. De Gier missed it.

De Gier slowed down, looking for a parking place. "That cyclist shouldn't have been on the tracks. Tracks are for trams."

"And for emergencies," de Gier said.

"We aren't an emergency."

"We're a continuous emergency," de Gier said pleasantly, after he'd parked the car was was strolling next to Gipstra through narrow alleys. "That's why I joined the police." -- Janwillem van de Wetering, Hard Rain 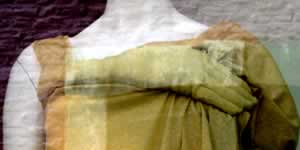