An interesting thing about the Munich rail station is that the food at the food court is actually appealing. Singapore manages this too, but Singapore's climate makes for a long tradition of outdoor food. And the news isn't the bratwurst, but the roll. (Why my local pizza joint doesn't try to make decent bread beats me. There must be a reason.) 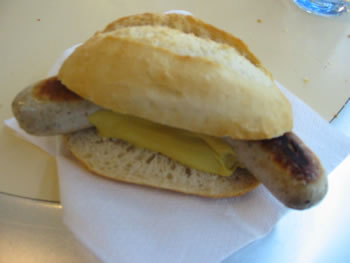 The train trip to Salzburg is pleasant, smooth, and just the right length. 90 minutes gives you time to settle, read, and watch the scenery, without making the trip seem like an epic. You round a bend and, suddenly, you're in the Alps. 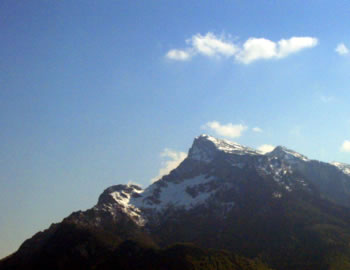 My first impression of Salzburg is that it's Durango, Colorado, with history. It's nestled snugly against craggy foothills. It's got lots of gift shops that sell kitsch (but I guess this is the part of the world that invented kitsch and so they're entitled) and the luxury fashion chains you see everywhere from Paris to Peru, and also some intriguing things. (They buy kitsch, you buy clever camp, and I buy bottles of artisanal vinegar from the flask -- apple, strawberry, and balsamico di modena). Of course there's also lots of history in Salzburg. Mozart, and modern. 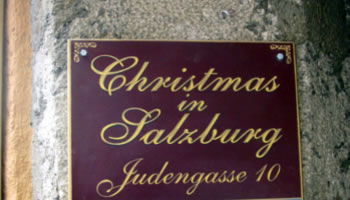 It looks like there's a lot of food in Salzburg, too; it's been a tourist town for a very long time. Some things are the same everywhere, except in Salzburg, when you have the pre-dinner staff briefing before family meal, you can do it in the square. 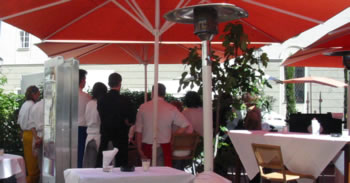 Hypertext '05 happens just after the end of the Salzburg Festival. We're here before the Festival really kicks off, and anyway I have no time to play hooky for concerts. But I saw posters for the Goldberg Variations tomorrow, Jesu Meine Freude (which I've never heard in concert) on Sunday, and several other delights.

I caught the Museum der Moderne on the wrong day, right between exhibits. But they let me see the etchings of Max Klinger (1957-1920) anyway. I don't think I'd ever heard of him, to be honest, but they're brilliant: strange visual narratives of sex and disaster. There's a six panel Eva und di Zukunft (Eve and the Future) that alternates Eden and Prophecy; he draws the Temptation was the serpent holding a mirror so Eve can see how good she looks with the apple, and he draws the Expulsion with Eve carrying a clingy, useless (but bulky) Adam out of the garden, as an tiny angel guards the gates behind her. The album I really admire, though, is Drama (1882), which starts out In Flagrante and leads through shame, motherhood, the death of children, and the failure of revolutionary dreams. All of this is in a very, very dark key -- about as dark as etchings get -- but it's also very tonal and very precisely drafted. Terrific. I think it might still be here in September, too.