Cautioned by Diane's 11-day weekend in London, I tried to ease the start of this travel fracas by taking the morning flight to London instead of the customary overnight jaunt. Boston is farther east than you think, so it's hard to get much sleep before you land at Heathrow.

That worked out well. I got lots of work done on the plane. I did some reading, too, and even had time to watch a movie. And, even though my connecting flight left early in the morning, I had six hours of sleep in a (fairly) comfortable bed instead of a bouncing plane.

Then, on to Munich. The flight was easy. The trip into town was slightly complicated by puzzlement over whether you took the train going right-to-left, or the one going left-to-right. It turns out, either train works fine. This is the Chicago Loop, writ large. Go Munich!

Dropped bags at the hotel, then charged off to the Neue Pinakothek because the day was already getting late. I even (uncharacteristically, especially when I'm travelling alone) splurged on a taxi. 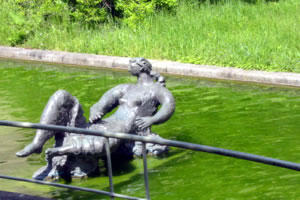 But, arriving in good time, I realized I was famished. As I'd last eaten somewhere over Greenland, that wasn't too absurd. Dashed to the nearby Brasserie Tresznjewski for a bowl of really excellent fennel soup, and a very nice plate of Schinkennudeln.

The Neue Pinakothek isn't embarrassed about 19th century art, which is on the whole a good thing. There's even an entire gallery of art that really didn't make it -- things in the original collection that have been tidied away ever since. 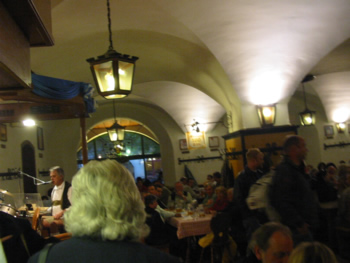 Eventually, I wound up at the Hofbräuhaus. First time in Munich; if you never do tourist things, well, you never get there. I asked for a small dark beer, which turns out to be a liter. I bought a huge soft pretzel from a pretzel girl in a drindl. Who can resist the chance to have a pretzel on the Platzl? 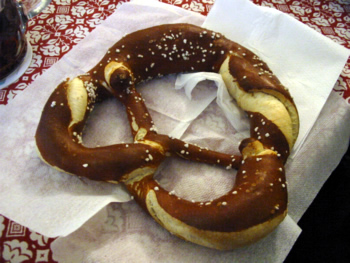 Meanwhile, I'm sitting at the very back of this huge room, filled with long, shared tables and filled with a German brass band doing the oomp-pah! thing. Good beer, too.

Eventually the tables fill even further. A couple of German guys get their liters, and then a nice older couple from the US sit down. They're revisiting the Bavarian town where she spent some time after college. He used to be a philosopher before becoming and indexer; we talk about Europe and MS and political correctness.

Note to audiologist: the restaurant program on my new hearing aids is good. I'm actually coping in a beer hall, with a crowd and a band.