Just saw Doubt. Any movie that pits Meryl Streep against Philip Seymour Hoffman is bound to be good. Really good. 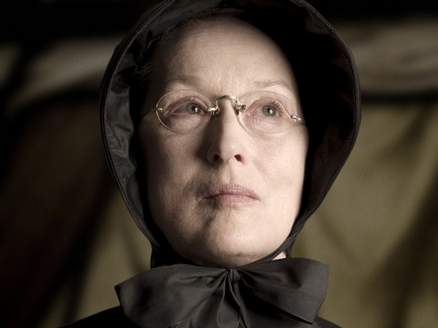 In one scene, the school kids are singing carols.

The first Noel, the angel did say,
Was to certain poor shepherds
In fields as they lay.

And this, for reasons I cannot fathom, has me scratching my head. What’s going on here? OK: there were shepherds abiding in the fields, and the angel of the Lord came upon them and the glory of the Lord shone round about them, and they were freaking out. Got it.

(Christine Robinson, a UU minister, has no doubt that the intended meaning is “particular.” But she doesn’t say how she knows this, and accepts as valid a young person’s critique that it seems paltry to single out only a few shepherds. There’s an inconclusive discussion at phrase finder. This page says it’s known to be 16th or 17th century but might be 13th.; I suspect “certain” is Victorian, in which case we can’t rely on the OED because it might well be Victorian emulation of Elizabethan usage; even if “certain” might be unlikely in 1599 (would it?), it’s not so wildly improbable that a random Victorian editor would necessarily cast it out. On the other hand, I don’t believe Shakespeare actually uses certain as a transitive verb.)