I took the new, late flight to London, which makes it easier to sleep on the plane. A further advantage of the times is that the flight was half empty.

I spent most of the day in two 18th century houses that have become museums. Dr. Johnson’s Gough Square rental is a lovely, modest little place. It’s a little bit bigger and perhaps slightly grander than the Adams Homestead in Quincy, but not by much – and of course it’s in London and not in a suburb of a primitive colony.

Sir John Soane was only about a generation later, but his house in an amazing museum. It was meant to be: he was a prominent architect, he designed his house to be a museum, and he arranged for Parliament to take it over and preserve the house just as he left it. It’s filled with amazing things: 4th century Apulian vases, a fine early ship’s chronometer built for the Duke of Marlborough, the Sultan’s pistol that Peter the Great captured, and then gave to Napoleon. There’s a Picture Room with the originals of Hogarth”s “Rake’s Progress” and a set of Piranesi sketches. There’s Gandy’s wonderful tribute to his friend, showing Soane’s then-new Bank Of England building as it might look in a thousand years or two, a carefully-preserved and studied ruin. 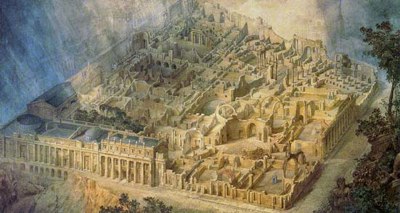 Joseph Gandy, The Bank of England As A Ruin

This painting was (and is) hung behind an ingenious hinged panel that is itself hung with other paintings, a fine if desperate expedient when one runs out of wall space. Knowing it had to be somewhere, I asked a guard where it might be. He graciously unhinged the wall to give me a peek.

Another great room is the first-floor drawing room, restored to its original hue of Turner’s Patent Yellow (lead oxychloride: think chrome yellow, maybe just a little cooler but just as saturated). It certainly is warm and inviting, though it must have cause the women some interesting pains in choosing what to wear.

It would be fun to do a monograph detailing the influence of Sir John Soane’s Museum on Isabella Stuart Gardner’s. She surely knew it, and I fancy I seem some quotations in the Gardner, like the sarcophagus in the central court. And I imagine the whole idea of the atrium is a response of another kind: we’re Americans, ours is a big country, we have space. Soane is all about ingeniously fitting his stuff into three townhouses; Gardner builds a new house around a wonderful indoor garden. The topic would make a fine little book. It probably already has.