The new Tinderbox 5.9 adds even more information to maps. Now, when you point to a note, you can have Tinderbox display a little extra information. For example, here are some notes Stacey Mason made for her Hypertext 2011 workshop paper; pointing to a note reveals the citation. 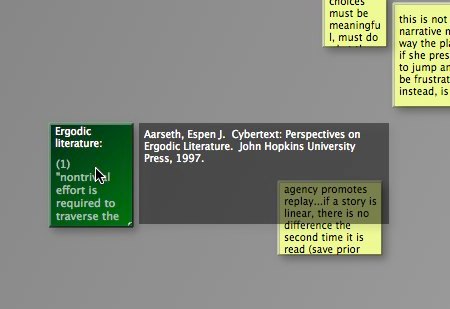 There’s a bit of interesting detailing in the actual implementation. Hovering over a note doesn’t do anything immediately. Instead, it “arms” an automation that will proceed to reveal the hover panel if the animation isn’t cancelled first. Moving away doesn’t hide the panel, either, but begins an animation to remove it. if the map changes while the panel is visible – for example, if an agent changes the note you’re examining – the map is revised beneath the hover panel. And the hover panel itself is sufficiently opaque to make small print legible, while remaining translucent so you can know there’s something underneath.

This might be overthought a bit, but we hope it’s going to help a bunch of people.