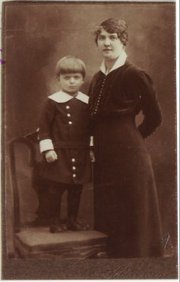 My father was born a hundred years ago today, on May 12, 1911 in Stockholm, Sweden. He never knew his father and was raised by his mother Karin and her family in the town of Norrköping. Often in conflict with his stepfather, who mistreated him, he went to sea at the age of 13, starting as a cabin boy. In the late 1930s John Erland landed in the United States where he was to spend the rest of his life. Like many immigrants to the U.S. he worked as a waiter. He was a perfectionist of sorts, and took great pride in the quality of his work.

You can never make that crossing she made, for such Great Voyages in this world do not any more exist. But every day of your lives the miles of that voyage between that place and this one you cross. Every day. You understand me? In you that journey is.