East Side, West Side

Last night, we saw Beauty and the Beast on Broadway. This wasn't precisely our choice, but the tickets were a Free Gift, and at 4pm on a Saturday your spontaneity is bound to be limited. There are sillier ideas, to be sure, than turning an animated melodrama into a Broadway show, though it's not necessarily easy to come up with one at the spur of the moment.

It's interesting to see a melodrama contrived in such a way that nobody -- in the play or in the theater -- can get very worried about anything. But, clearly, people want to like The Lion King and Beauty and the Beast. There were plenty of kids in the audience, but not more than I remember when I saw Oliver! on its first tour, when I was a kid at my first real show, and Oliver isn't kid stuff.

My clue: the big applause in the curtain call went to the candlestick, and meerkats are the new zoo celebrity.

If we wanted to do, in hypertexts, whatever it is that these confections do: could we? In games?

Sunday, we went uptown to visit a gallery that was, unfortunately, closed. Then we went downtown to another set of galleries, all of which were also closed. Then back uptown to the Met, where the lines to pay $12 each for admission we so long we gave up, and walked instead to the Frick, where I'd not been in decades and which was well worth the wait. The guards, clearly, felt it was their duty to guard the collection from us, and to constantly remind us of this fact, thereby adding to the experience of visiting a house of a guy who liked to pick up the occasional Vermeer to go with his Holbeins.

Then, not finding a taxi, walk 20 blocks back to the hotel to collect our bags, kiss Linda, and run 20 blocks to catch the Acela to Washington. 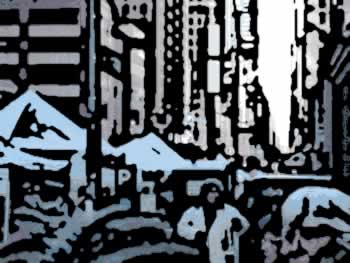 East side, West side, all around the town
on this date |