The trees in New England are just about bare, and at Eastgate the annual textbook rush is winding up. Cartons of hypertexts have gone out to schools and colleges and universities all over the Northern hemisphere. (Australian schools are great hypertext customers, but their academic calendars are topsy turvy) 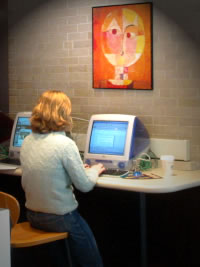 Harkness Common at Harvard Law School, Walter Gropius, Cambridge MA. The painting is real, and was created for the space.

So, people all over the place are studying hypertexts like afternoon and Victory Garden and Patchwork Girl and Samplers. These are not new hypertexts -- literature courses prefer to study work that has been mulled over and argued about for a few years. These aren't technologically sophisticated hypertexts either, though even the oldest -- afternoon -- still has some tech secrets that nobody has properly described in the journals.

Why do we study afternoon so often, and so rarely study its game contemporaries like Captain Magneto and Wizardry and Donkey Kong?

The hypertexts are about people, about life, in a way the games are not. In afternoon, Peter is a fellow who wants to say that he may have seen his son die this morning. Whatever your position on ludology or post-structural theory, when a guy mentions this over lunch, it's a hell of a note. Victory Garden is about a grad student who suddenly finds herself at war, one of Uncle Sam's fighting mail sorters, and you've got to admit that it's topical as hell. The heroine of Patchwork Girl is (literally) falling apart at the seams, and the protagonists of the nine vicious little hypertexts in Samplers are barely holding it together. They're all interesting people, all people you think you might learn something from.

The hypertexts, too, promise to repay study. Their secrets, once we understand them, should be ours to deploy for our own purposes. Once you understand how Joyce drives afternoon with language and Moulthrop drives Victory Garden with incident, well, then you'll know how to do the same thing in your love letters or your presidential weblog or whatever it is you decide you'd like to do next.

For games, it's just not obvious today where you go outside the game, unless you want to be a game designer.

Games could tell us about people. A few do. D&D taught us a lot. You can learn plenty from poker and contract bridge. I think we might learn a lot by studying exactly how Clan Lords works as a community, or how World War II Online doesn't.