The turkey (13.5 pounds, brined, all-natural and free-range) was more difficult than usual this year. First, there was the usual question: how long? The answer I learned at home was simple: you light the fire at half-time of the early football game. This year, we were eating a little earlier, and the turkey was smaller, and there were lots of cooks doing things at the last minute. I wanted to double check. Answer: 11-13 minutes per pound, more or less. Tinderbox will find this for me next year. (This works out, precisely, to half-time in the game. Who knew?) 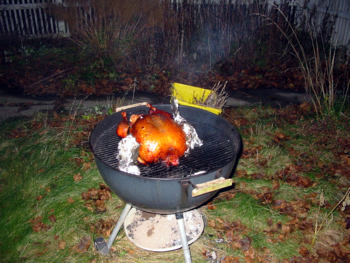 Then, there was the wing problem. This turkey was a wing-flapper. Its wings stuck out. Should they be trussed or tied? I checked The Joy of Cooking of course, along with a million other Americans; this must be the busiest day in the calendar for Joy. Leave the wings alone; if they get too dark, cover with foll. 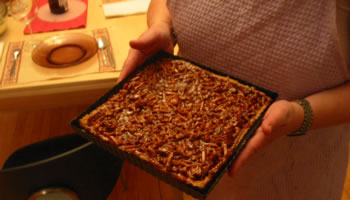 Fine. Half time. Shortly after I put the turkey on, half of the fire went out. This has happened before, but usually it's easy to restart. For some reason, this fire never quite got going; in the end, I left the bird on the grill for an extra 30 minutes. The leg temperature at exit was 175°F, a little high; the breast claimed to be a little lower than I liked, but when carved the bird was smoky and juicy and nicely flavored by the traditional stuffing of a quartered onion, a quartered apple, and a quartered orange. (Next year, maybe lime?)