Canteen is a great idea. It’s a tiny diner, off the lobby of a small San Francisco hotel. Booths and a counter, fifteen or twenty covers, a range in the back corner. Formica and naugahyde. 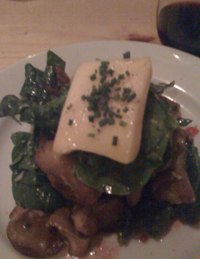 But instead of a bottomless cup of coffee, they do serious food. Three seatings a night at fixed times. A small menu (revised each week): a handful of apps, a handful of plates, four desserts. A nice wine list. Really impressive food.

My chanterelle salad was really, really good — probably as good as the salads I had in Vienna, when it (apparently) was The Week Of Chanterelles. My pork tenderloin confit was lovely, and the potatoes — precise and perfect little cubes, just a hint of crunch bacon, floating along with the pork in a wonderful apple mustard sauce — were impressive. And a vanilla soufflé too.

Tasty! And why do we need identical food in every space all the time?