For Thanksgiving, I tried making kahk bracelets. They’re small, crunchy dough circles, something at the light end of the pretzel family. I thought they’d go nicely with football, and we certainly seem to have sold plenty of them.

I made the kahk from Claudia Roden. I’d never heard of them before, much less tasted one, and as Adam Gopnik points out in his wonderful New Yorker essay on cookbooks, not knowing how something ought to be is sometimes a recipe for kitchen confusion.

It turns out that Googling kahk leads to some wonderful journeys. Here is Greg Patent on NPR talking about “Granny’s Kahk”:

My mother and her mother emigrated to Shanghai from Iraq in 1930. My grandmother had been widowed many years earlier. Over the intervening years, her three older children had all found their way to Shanghai, and her only son, Jason, eventually sent for Granny and my mom once he was able to support them. At the time, thousands of Iraqi Jews resided in Shanghai, one of the most cosmopolitan cities in the world. The Iraqis did what they could to maintain their customs. Granny, the widow of a rabbi, went to synagogue twice a day.

We all lived together in her one-room apartment during World War II. Granny was a fabulous cook and baker. Her kitchen only had room enough for one person, so my mother wasn't able to learn from her. What my mom and I remember best are the smells, tastes, and textures of Granny's food. The two pastries that stand out as the sine qua non of her repertoire are kahk and cheese sambouseks (see page 111). When my family immigrated to San Francisco in 1950, we had to leave Granny behind in Shanghai. She eventually traveled with my uncle Jason and his family to Israel and then to Canada, but she died without us ever seeing her again.

With this in mind, Women’s Lens was created to inform and present a woman's voice to the Diaspora. I explore anti-Semitism, Israel, socio-economic issues and their effect on women worldwide. We also look at culture, not only our own, but the ones that have had a great effect on our traditions. Since, for a lot of us, French was our native tongue, many posts on Women's Lens are in that language. Inevitably, there will also be narratives peppered with some Arabic, Spanish, Ladino and any other language that may have enriched our lives.

and she’s got kahk, too!

I remember when my mother used to bake, she used to make two varieties; this one and a sweet version. She had those huge, square black baking sheets (saneya) that our maid used to put on her head to bring them to the neighborhood ovens. Most of us middle class people didn't have our own ovens. So, the maid would pile 3 or 4 of these sheets on her head and walk over there and sometimes, I would get to accompany her.

When she came back, my mother would store these in huge "bartaman", which is a glass container too large to be called a jar. They would keep for a few months. She was an awesome patissière. 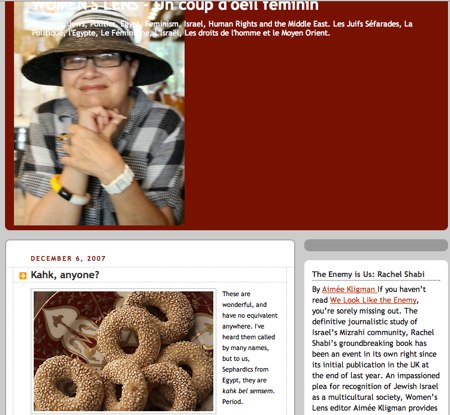