There’s a new episode of The Romero File, the ongoing (and dramatic!) Tinderbox map tutorial. And Steve Winnick has a new response, tackling the same issues and using Tinderbox from a lawyer’s perspective. 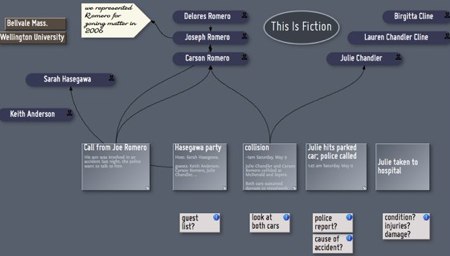 This is a very quickly sketched map, based on the facts developed from a couple of phone calls in a routine legal matter. Two high school kids leave a party separately. Somehow, they manage to get into a minor accident. No one’s hurt, the cars are dinged, their parents are going to be angry. They drive off. Later, one of the kids drives into someone’s mailbox — which, unfortunately, it set in concrete. She’s not badly hurt, but Mom’s BMW sustained further damage. There’s a police report, an insurance tangle, and the police want to talk to her boyfriend – presumably about the first accident. 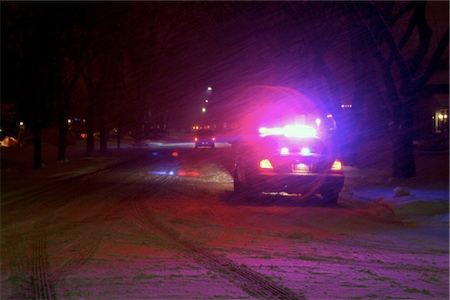 At Steve Winnick points out, even this simple picture offers all sorts of questions. How old are the kids? Could alcohol or drugs be involved? What are the dramshop liability questions that arise? How are we going to sort out the damage from the first accident from that incurred in the second? And who is going to be paying our bill, anyway?

And, already, we’ve got a large and growing cast. Two kids. Their parents. The host of the party, and her parents. And the guests at the party – both invited and uninvited. The police officer who filed last night’s report, and the desk sergeant on duty this morning. The doctor who treated the girl. The insurance adjusters for both cars. And, if this actually becomes a case, we’re going to have attorneys for the kids, the host, both insurance companies, a DA, and who knows what else.

The key points are that you’ve got to write stuff down – facts, contacts, theories, queries — and you can’t know yet how they ought to be organized. You need to keep track of contingencies. For example, we aren’t sure how old the kids involved are; if they’re minors, all sorts of new issues arise, and we don’t want to forget those until we’re sure of their ages.

So we need to keep things connected and keep things organized, even though we are always aware that we may need to change those connections and reorganize everything tomorrow.