Over at Winvictus, attorney Steve Winnick is working through the Tinderbox tutorial, The Romero File.

In the tutorial, the initial Tinderbox map focuses on what happened. Winnick focuses more closely on the legal issues the case presents. Even though it begins as a fairly routine matter of a minor traffic accident after a high school party, we can identify quite a few questions – some of them far from routine – even in the opening minutes. 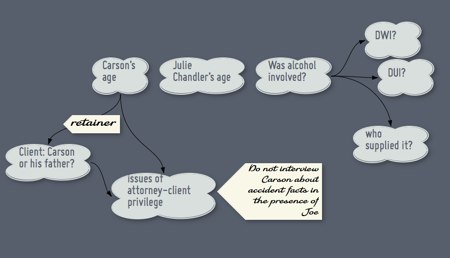 Preliminary issues in the Romero File. Click for full-size

Steve lays these out in lists and outlines, and that works well. Some people find fast information maps like this one more congenial than lists, though some vendors extol their virtues unreasonably. The chief advantage here could be ad hoc conceptual clustering, or perhaps the opportunity to represent dependences one might later forget. For example, Carson Romero’s age is interesting both because he might have been an underage drinker, because attorney-client privilege of a minor needs to be carefully thought through, and because the attorney naturally would like to know who will be paying the bills.