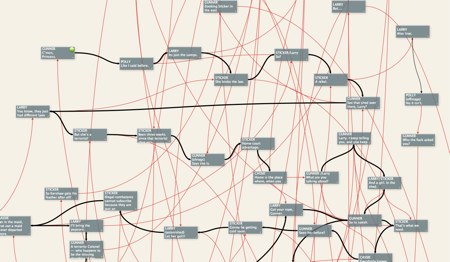 For Dangerous Reading this weekend, I’ve put together a scene from The Trojan Girls (originally conceived for the 2001 Card Shark paper) as a dramatic reading.

In the original paper, I argued that a hyperdrama could give up lots of control over exactly when speeches occur, and in what sequence. I’ve always thought this intuitively obvious, but nobody else does.

So: a demo. One scene, about ten minutes long. Nothing very unusual or at all experimental or postmodern. Three soldiers have a problem. They’re going to solve it by committing a war crime. We see them get from here to there.

And then: we’ll do it again, in a completely different sequence. A few speeches shift from one character to another. A few very short speeches get added or removed. We begin and end with different speeches – though the action starts and ends with the same situation. (A number of relationships between the characters do change between the readings; for example, one of the soldiers in the second reading turns out to be sleeping with a collaborator. Links have consequences, but they don’t change everything – only what can be changed.)

The first read-through starts in a few minutes. This morning, I was concerned: was the second reading really different? Or had I simply swapped a couple of speeches. The answer appears above in a detail of a part of the scene. Red links are the first reading, black links are the second.