It's easy to long for the big box office, the mass audience of broadcast. But the 20th century taught us that's a temptation best avoided. The mass audience can only hear the brutal, the stupid, the squalid -- the simplest messages of sensuality and fear.

That's the promise of hypertext -- and of the weblog. Not broadcast -- not the mass audience or the Great Cause. But not a retreat, either, into the vain, vapid Hippiy hope that all you need is love, that living well by a pond somewhere is all that matters. 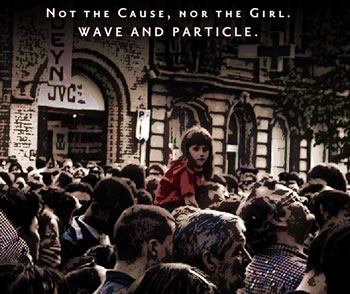 The curse of the twentieth century was our collective rush to embrace broadcast media -- industrial-scale publishing, radio, mass marketing -- without thinking things through. Suddenly, one Leader could Lead millions astray -- and only the worst messages, dressed in the brightest finery, could be heard. And, just as suddenly, everyone could experience the best (reproduced) paintings, the finest (recorded) musical performance, the greatest (filmed) theater -- and, with that wonderful opportunity, we forgot (for a moment) how we treasure contact and immediacy and spontaneity.

They knew they'd never seen him on their TV screen
So they passed his music by.

Hypertext lets us speak together, each to each -- writer and reader, not equivalent, but sharing dialogue and jointly carrying the burden of understanding. The Web lets us each get an audience of willing listeners -- some more, some less, but it's a big world and there are plenty of listeners for all of us. If we have learned anything from a half century of the postmodern, it is to hold two ideas together at once. Much nonsense is said about the nature of the digital, but this is the real lesson we must learn. Not ones and zeroes, but particle and wave -- together, one thing.

Not the girl, not the cause, but both, together, at once. Not the struggle, nor the triumph. Both, and neither -- as they really are, not as the romantic or sentimental illusion or the forced dream, Art and science -- one thing. Together. Five billion voices. One by one.

Clarification: by "mass audience", I mean the attempt to address everyone at once. Not, as pdg reasonable interpreted, the world at large. The difference between all the people -- who I think are usually good -- and crowds and mobs -- who I find are often dangerous.