If you live between Baltimore and Montreal, you might want to drop everything and trek up to Boston to see Carmen at the A.R.T.

As you know, I don't say this often. It's an unusual performance.

What director Dominique Serrand has done, here, is to trim Carmen back to theatrical proportions, to discover the drama within the opera. The score is adapted for two pianos, which means that the chorus can be trimmed back to three or six -- and the performance can be staged in moderate house like the Loeb. Above all, it means the production can focus on acting -- accepting the music as Shakespearean productions accept the poetry. 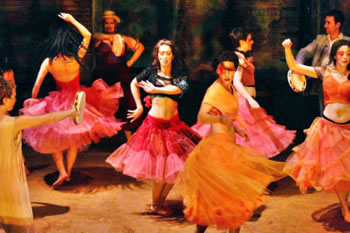 I don't read A.R.T. reviews before the performance -- I'm a subscriber, for years we attended the first preview, I don't want to spend my time in the theater arguing with a critic, and especially not with the Globe critics who tend to suffer from a severe case of second city-itis. But Ed Siegel lost his head for the production:

It helps to have a force of nature in the title role. You might hear a better Carmen at some point in your life than Christina Baldwin, but you'll have to search far and wide to see a better one. She takes over the Loeb Drama Center stage the way her character captures men's hearts, so assured of her power and beauty that she knows only death can stand in her way. In a performance as sensual as it is self-confident, Baldwin is by herself worth the price of admission. There's nothing wrong with her voice, either. It's strong, true, and able to strike directly at the heart of whatever Bizet and director Dominique Serrand put in her path.

So, take advantage of the fares from BWI and Philly, or hop in the car. Closes October 8.